Tombamento is the positive appropriation of the Brazilian slang verb "tombar", what means the murderer of a Black young person by the police. The appropriation aim to say: If they will kill us, we will arise.

"Tombamento" is today the very new movement of the Black Brazilian LGBT and Feminist youth who had entered Universities for the first time in the country history with the help (loans and grants) from the last Government and is now claiming their place and rights in Brazilian society. The movement is happening all over Brazil and it is quite innovative as it is the Afro-LGBT and Afro-Feminists who are caring in first rang the most important fight of the Black Movement in Brazil today.  Mostly formed by the black invisible youth from the suburbs, they accumulate all minorities: racial, gender and economical ones.

They are the ones who suffer most from the violence that is perpetrated in Brazil on the black people. Brazil is the most violent country in the world against LGBT and Afro-Women. The recently statistics denounced that each hour around 500 women are aggressed, being the black women from 16-25 years the ones who are touched in double; Everyday day, one person issue from LGBT is murdered in the country. In 2017 the violence against LGBT persons raised 30% in Brazil.

Even though, the movement is quite positive and full of hope. Entering University made this youth empowered and fierce of their African roots. So now they are claiming their place in the Brazilian society, whose colonial structures is always pushing them down back to invisibility. Tombamento is a strong mouvement that is shaking the bases of the post colonial weak democracy in Brazil, and claiming for a real democracy, where the afro-descendents are included.

Brazil lived a significant social inclusion in these last 15 years, but all these programs are risking to be canceled. Tombamento youth is in a slowly and continuously fighting and resisting for their survival, physical and emotional, through arts, through colored way of showing their presence, through parties, gathering and manifestations. As, for them, having a profession is probably the only way out of the favelas. 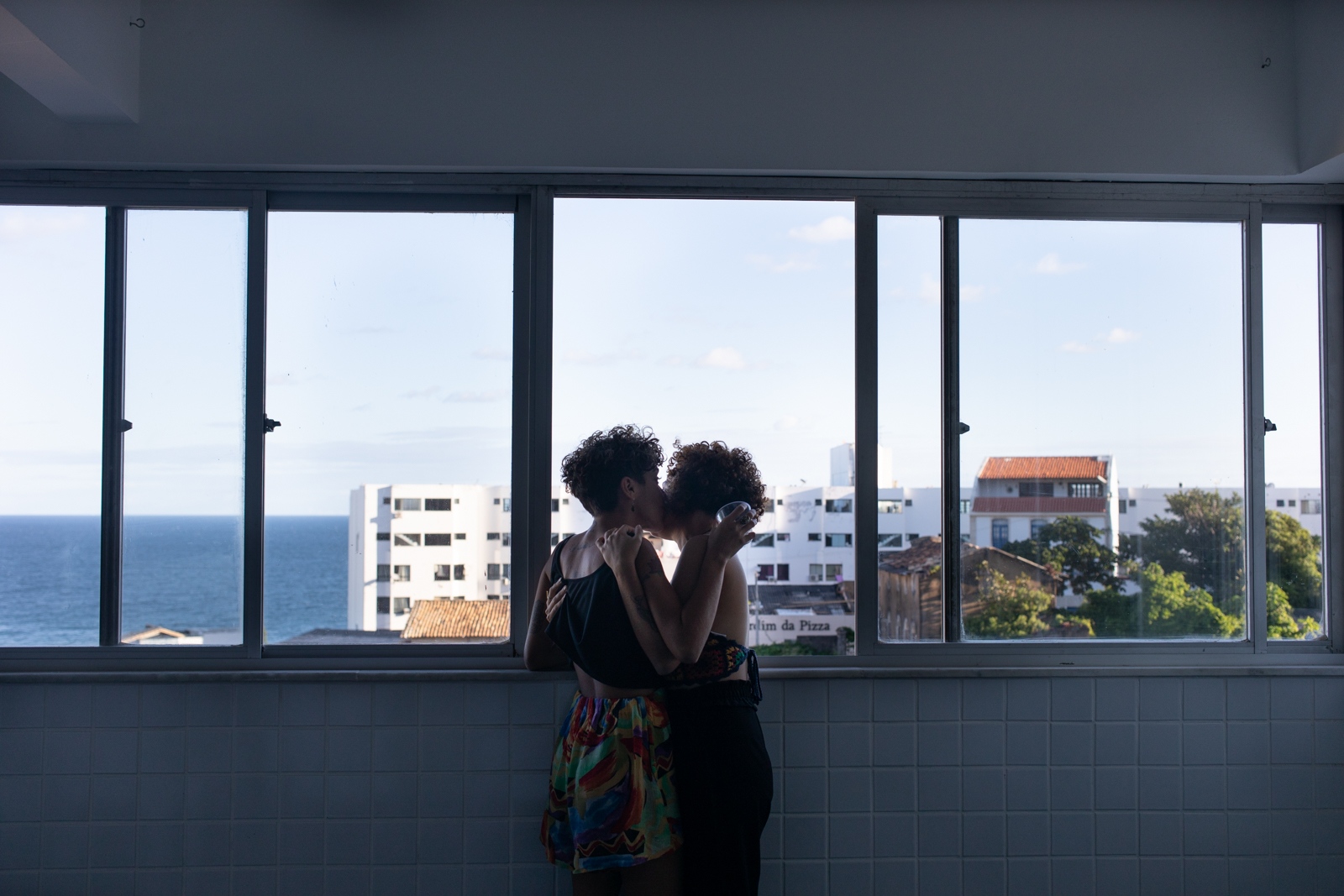 Jessica Magliano, 26 and her girlfriend Luana, kissing at the window of the social floor of the building in Salvador. They are now living in Salvador to study, coming from Joao Pessoa, Alagoas, where both frequents parties and gatherings from Tombamento generation. Both find Salvador a better city to live - in regards with studies. As a lesbian couple, they think the actual times are a hard moment to express themselves freely  as the radical  right wing is growing strongly in the country, they feel not entirely safe. Salvador. 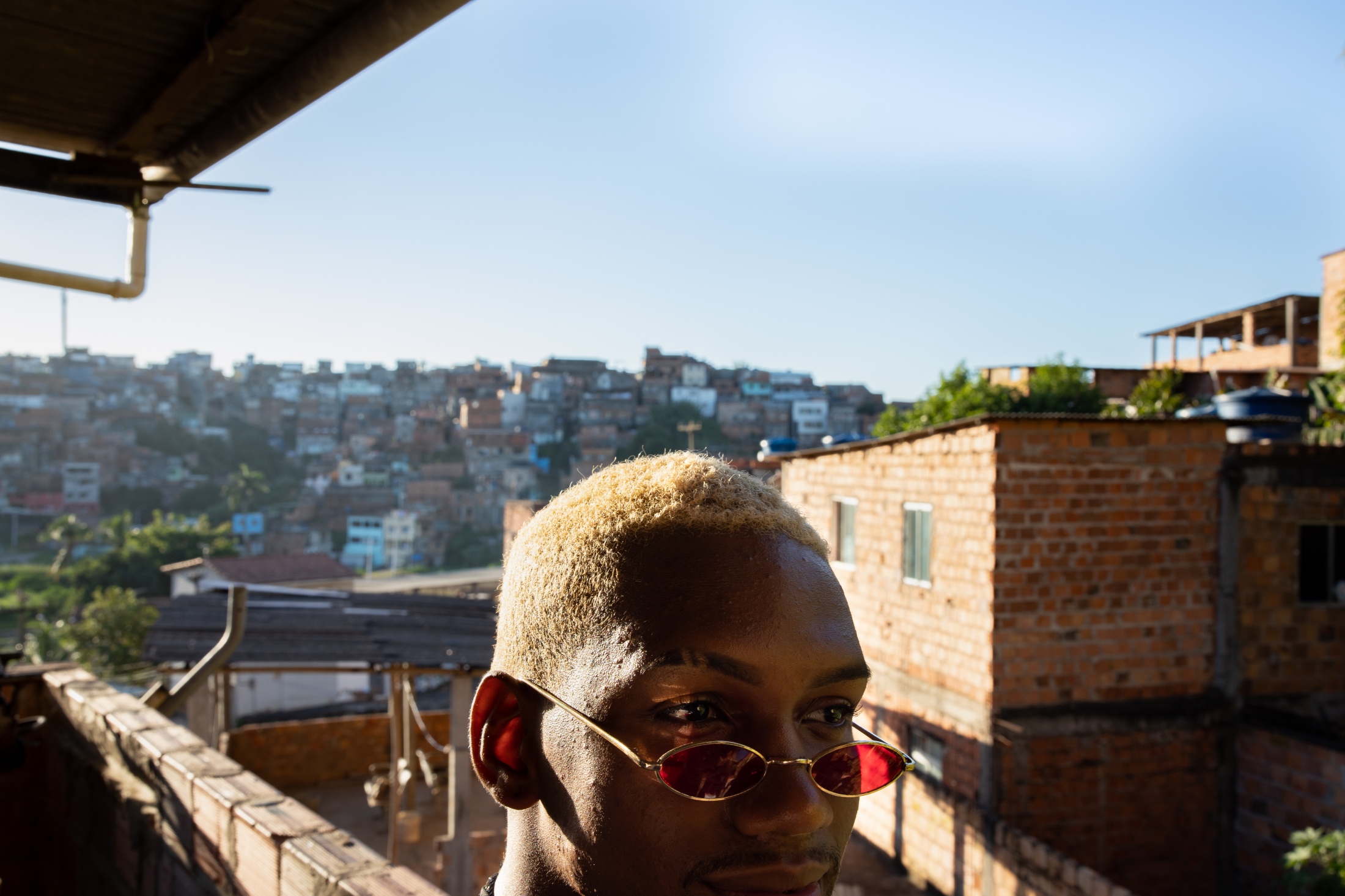 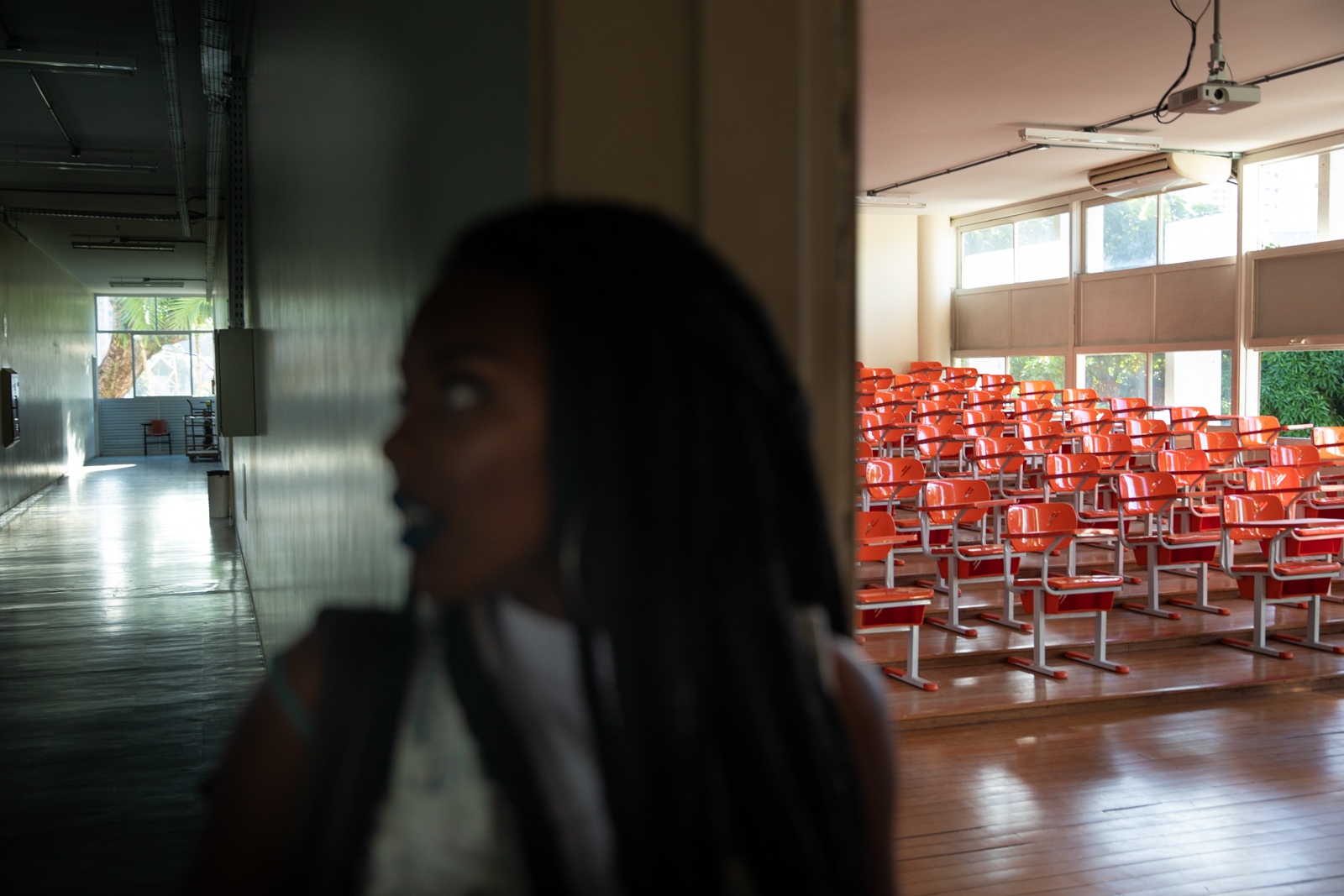 Samira Soares, 23, student at Humanities course, stands at the door of a university empty room of the University of Bahia. Born and raised in the countryside of Bahia, daughter of a housekeeper, Samira came to Salvador to try a better chance then her mother, trying to scape the housekeeper faith of so many young Black Women of Brazil.
Without money to studies and bills to live in Salvador, Samira entered University with the help of some student grants of the old Government and thank to this financial support she was able to pay her life and keep her University studies.
Since 3 years ago and today, almost all of the student grants and programs to help young Brazilians to study are being closed and failing to disappear. Thousands of young, many from Afro-Descendances, are losing their opportunity to construct a better life.
Salvador, Bahia. 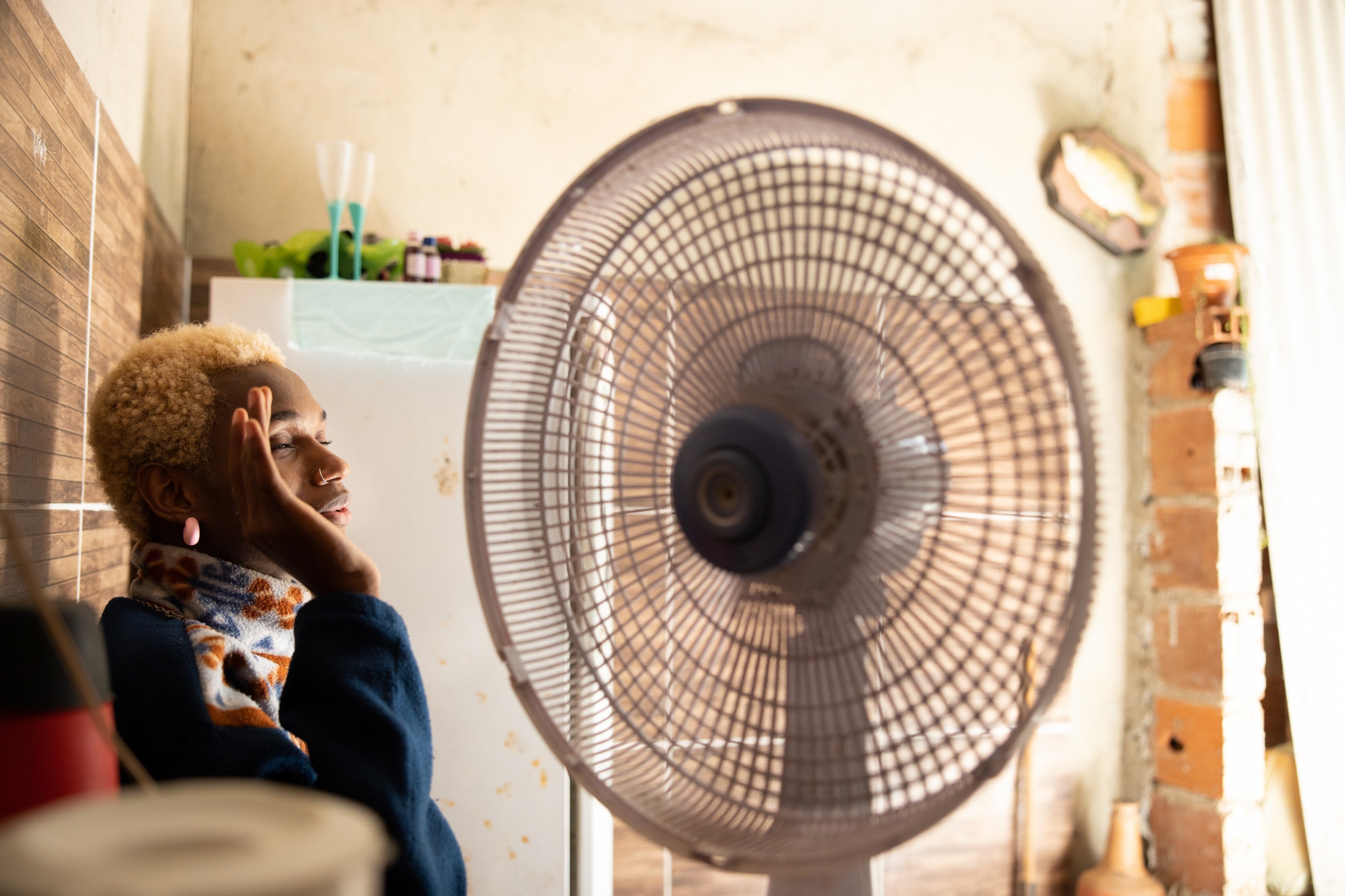 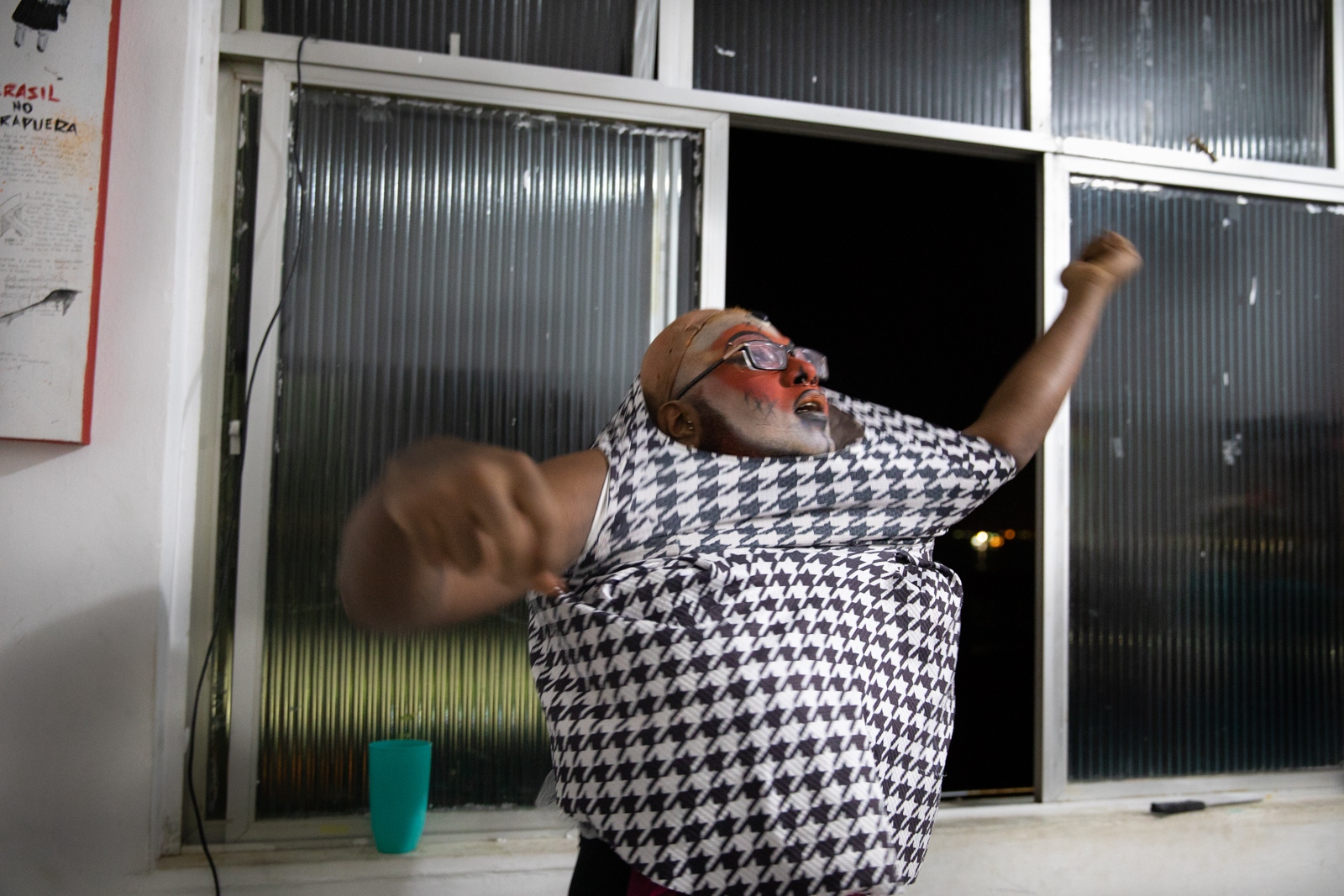 Malaica, 26, prepares himself to go out to a LGBT party. Malaica is known for his Drag Queen presentations where he dress his beard with flowers, one of the unique Drag Queens who plays with a male gender questioning. Salvador, Bahia. 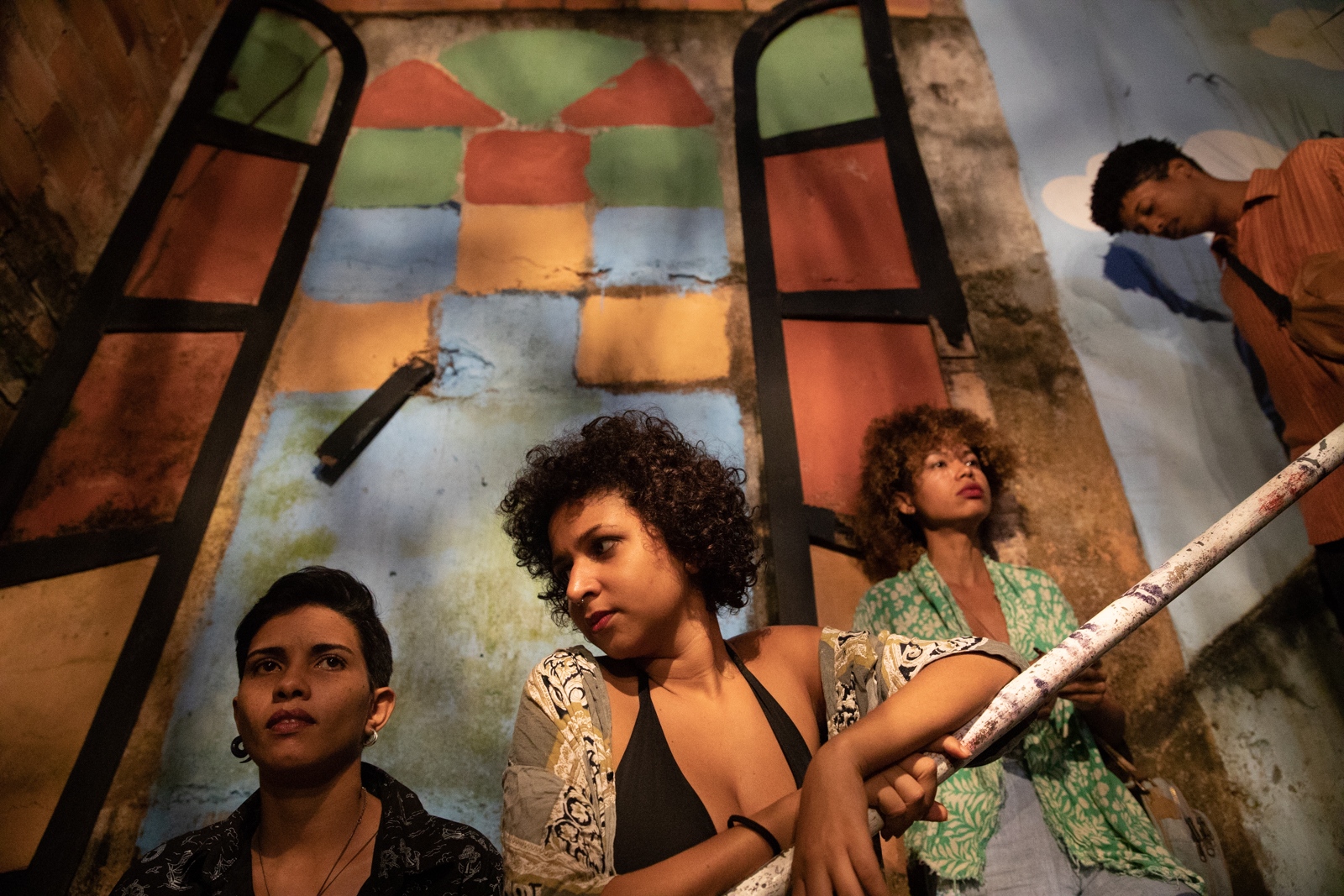 Girls gathering at Batekoo party in Salvador. Batekoo is an important and significant event for the new generation of Afro young LGBT and Women in Brazil. Started in Salvador the party is now present in the main cities of the country. Their intention is to promote a place were Afro-Women and LGBT descendants can enjoy the nightlife in safe. Brazil is one of the most violent countries for LGBT and Afro-descendant women. 56 Women are raped each hour and violence against LGBT raised in 30% last year. 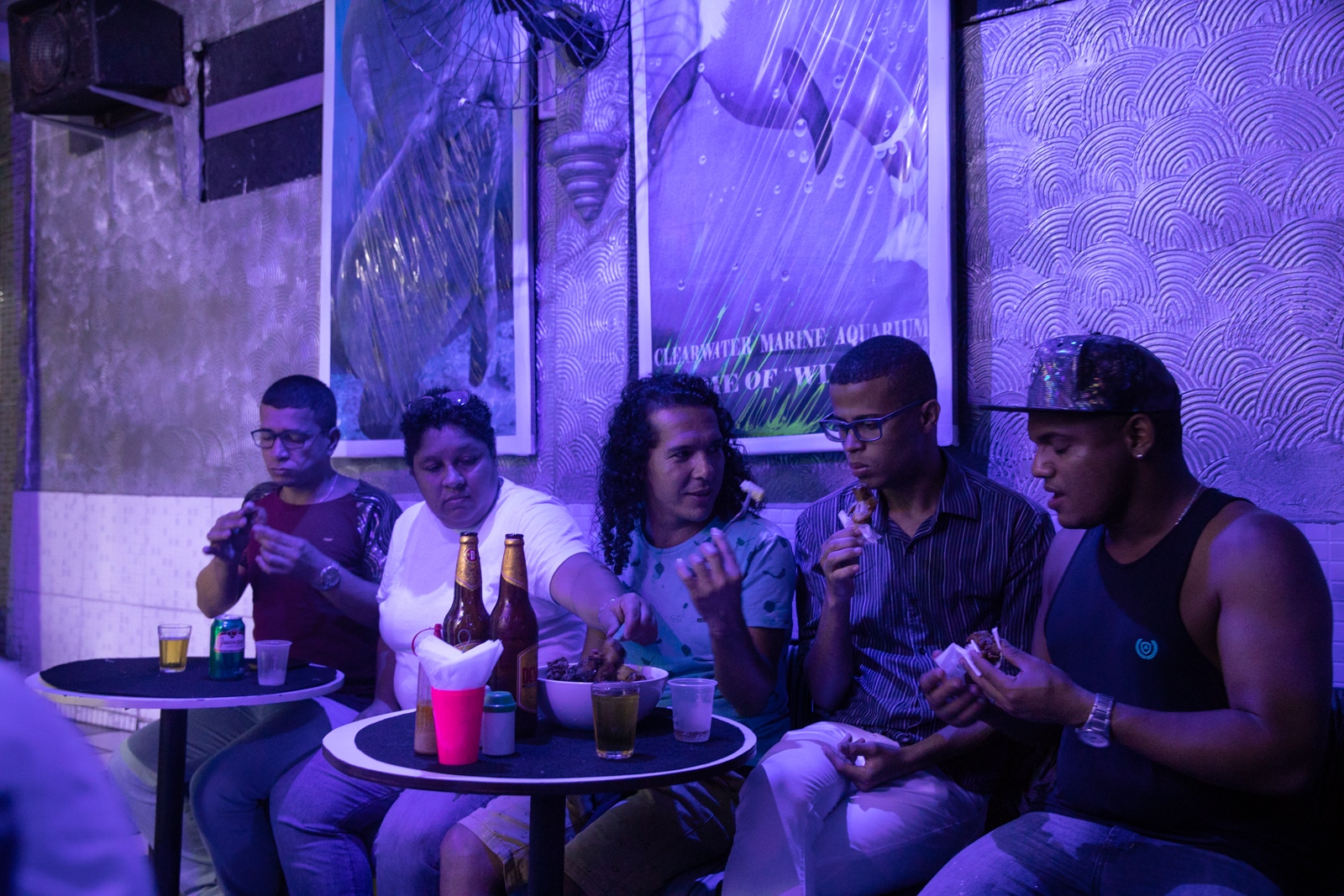 Friends and people of the LGBT mouvement of Bahia together at the Marujo's bar, a underground bar in Salvador for LGBT concerts and Drag Queen shows. 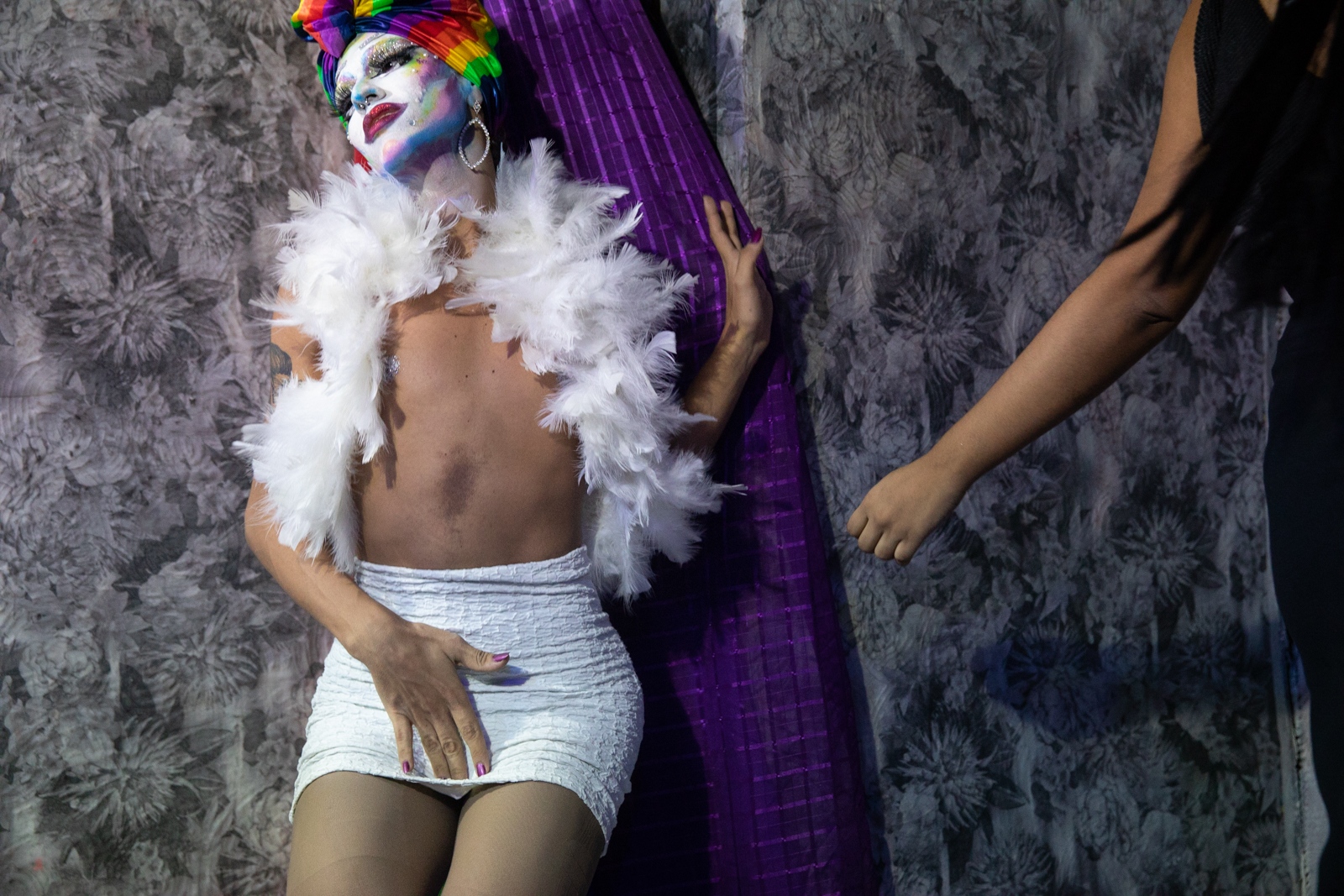 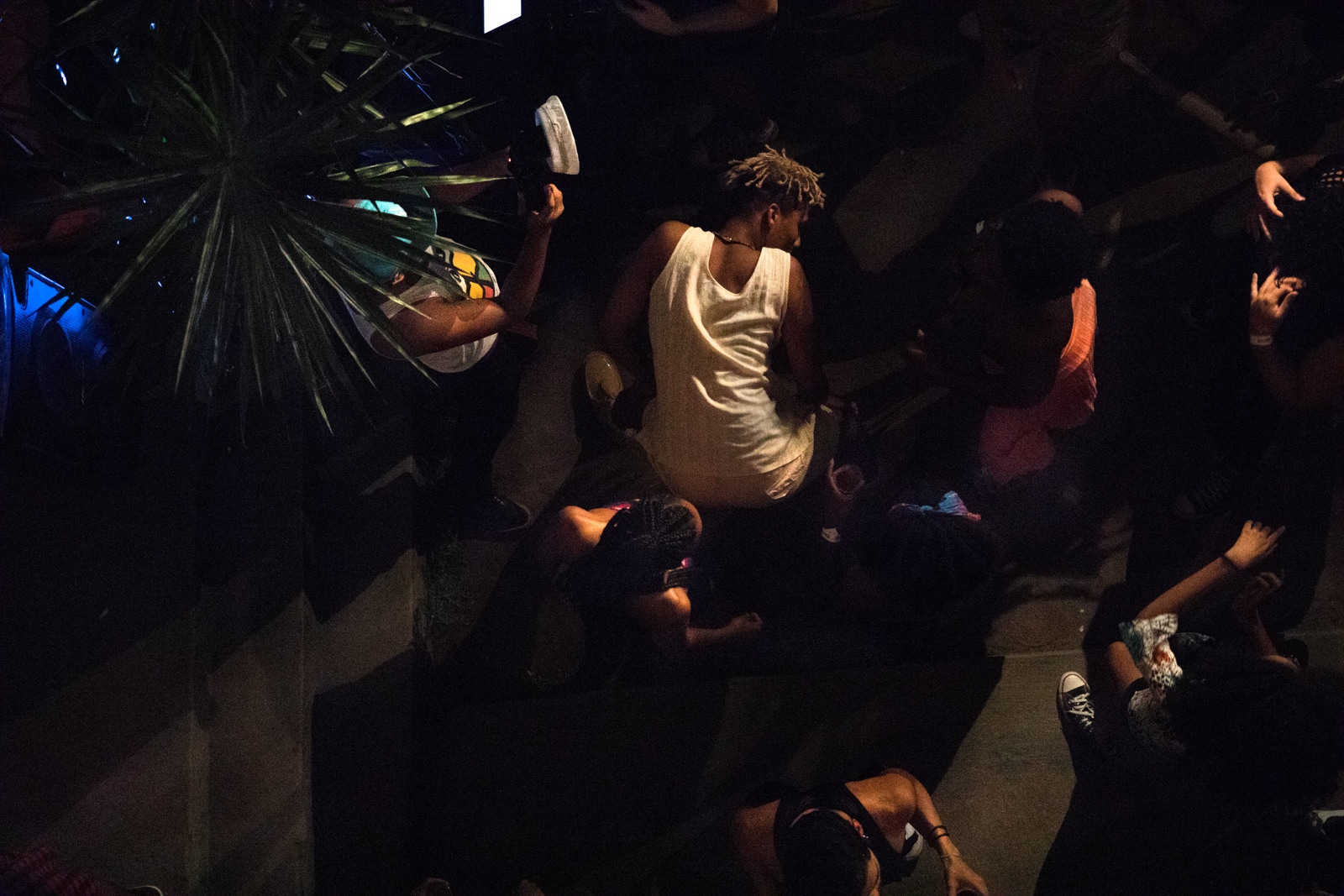 Batekoo party in Salvador. Batekoo mean "move your butt", for the movement very typical from the young afro-descendants of suburbs in Brazil. 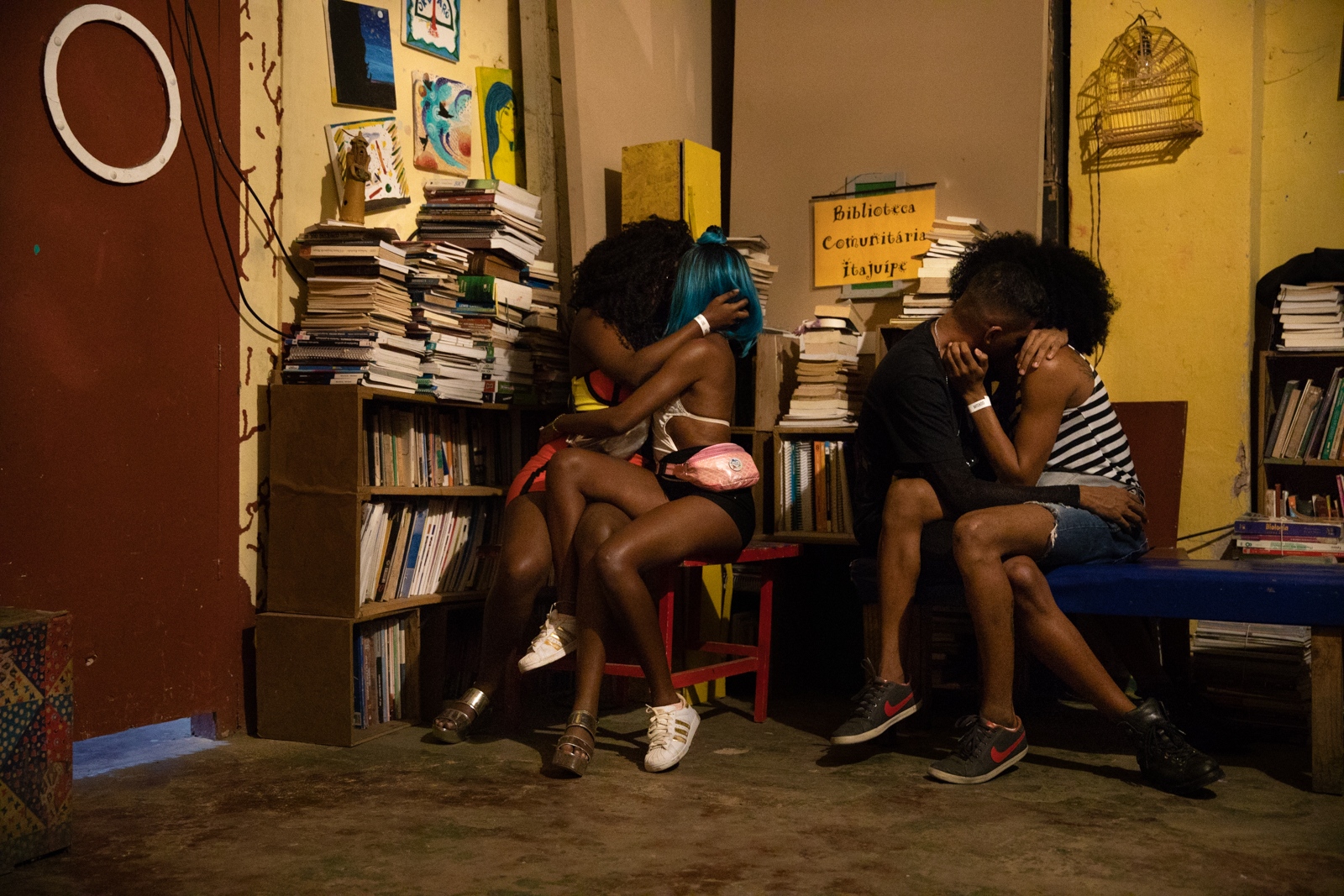 Batekoo party in Salvador.Batekoo is an important and significant event for the new generation of Afro young LGBT and Women in Brazil. Started in Salvador the party is now present in the main cities of the country. Their intention is to promote a place were Afro-Women and LGBT descendants can enjoy the nightlife in safe. Brazil is one of the most violent countries for LGBT and Afro-descendant women. 56 Women are raped each hour and violence against LGBT raised in 30% last year. 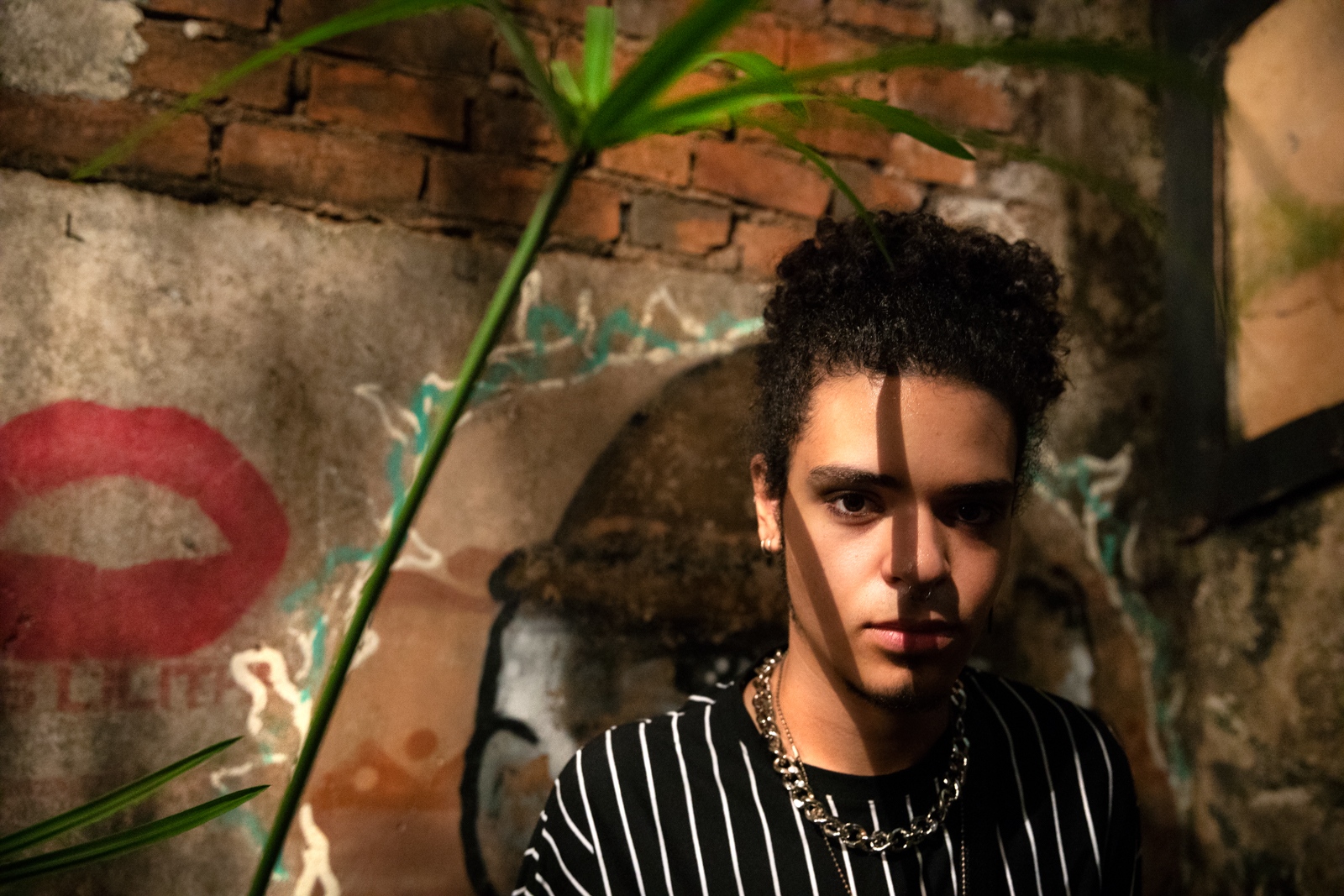 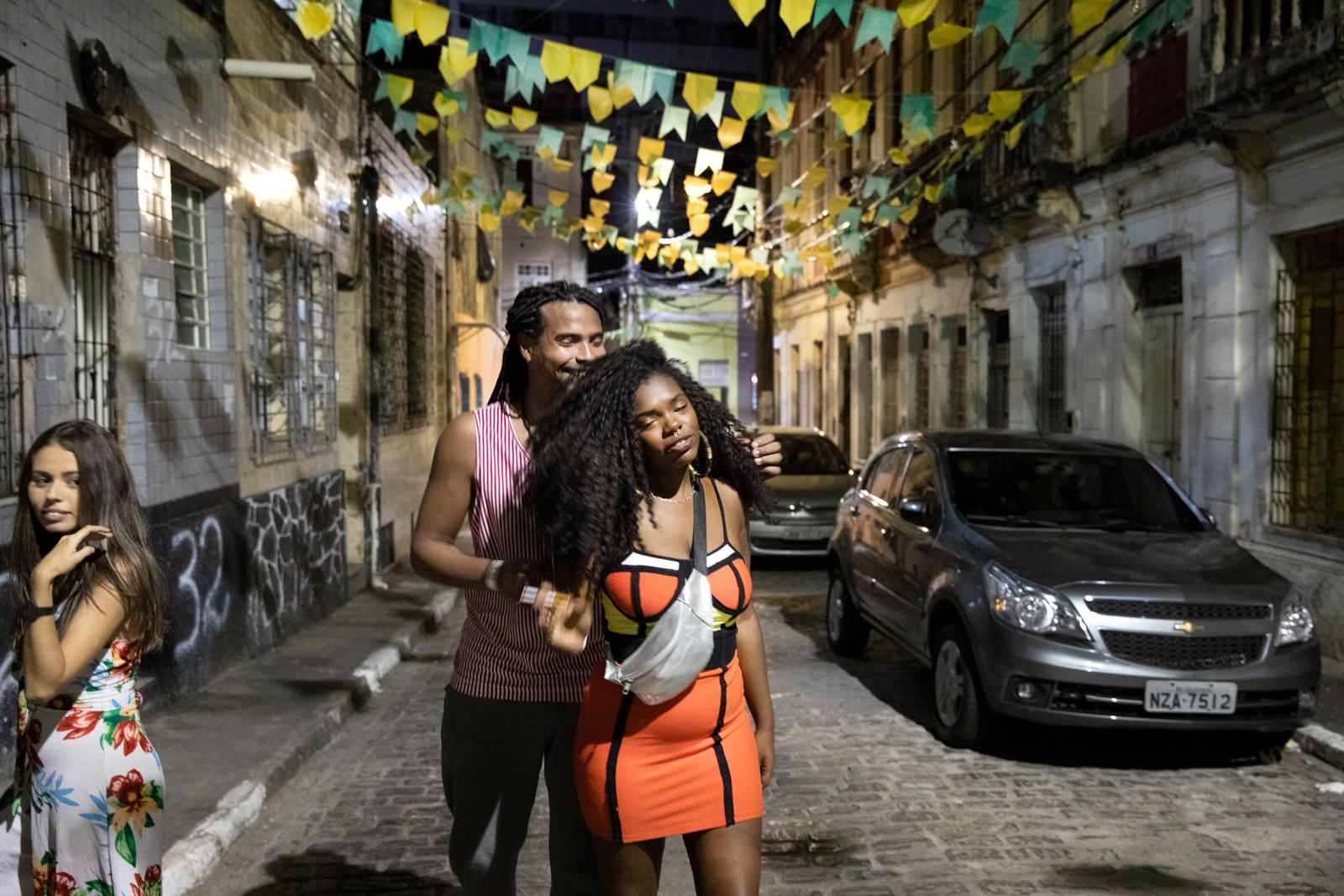 Friends in the streets in front of a Batekoo party in Salvador. The Afro-Brazilian women are becoming very aware of their nature and origins. Many discussions about how letting the natural Afro beauty and hair are also part of a political manifestation for democracy and inclusion. Intersectional mouvements are happening between feminism and LGBTQI+ social requests in the country. 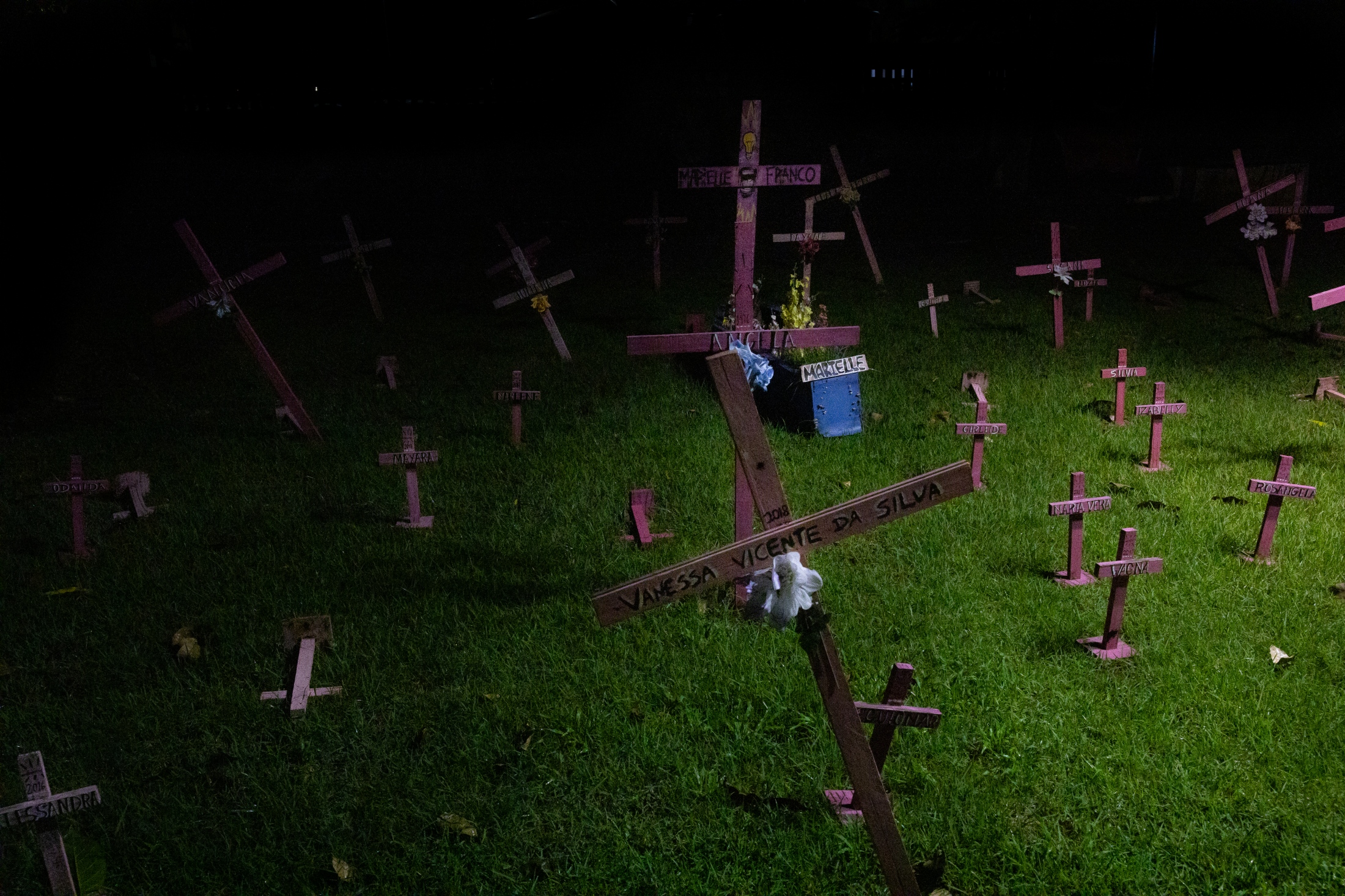 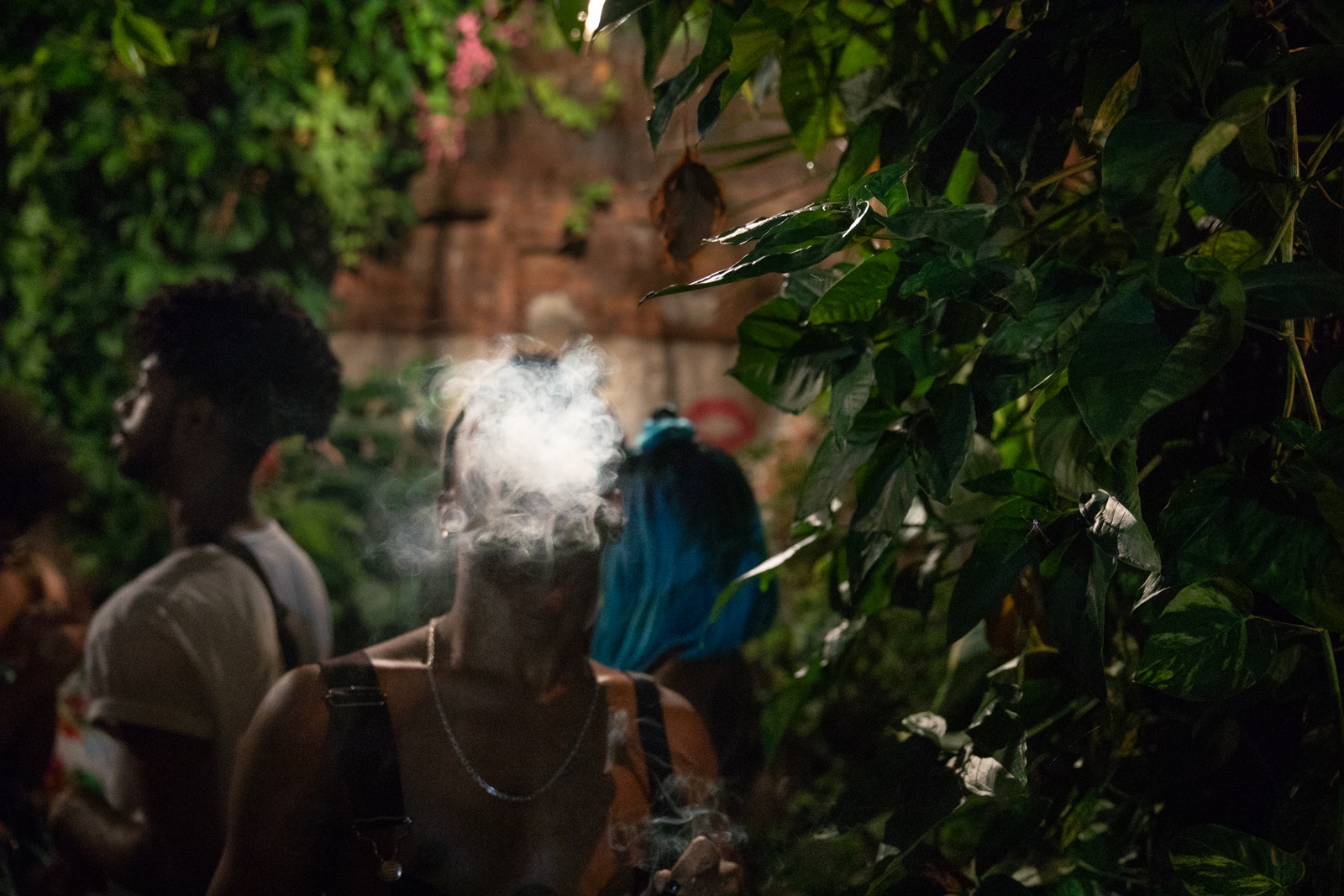 At Batekoo party. These parties are a good ambiance for expressing freely a gender experimentations. Salvador, Bahia. 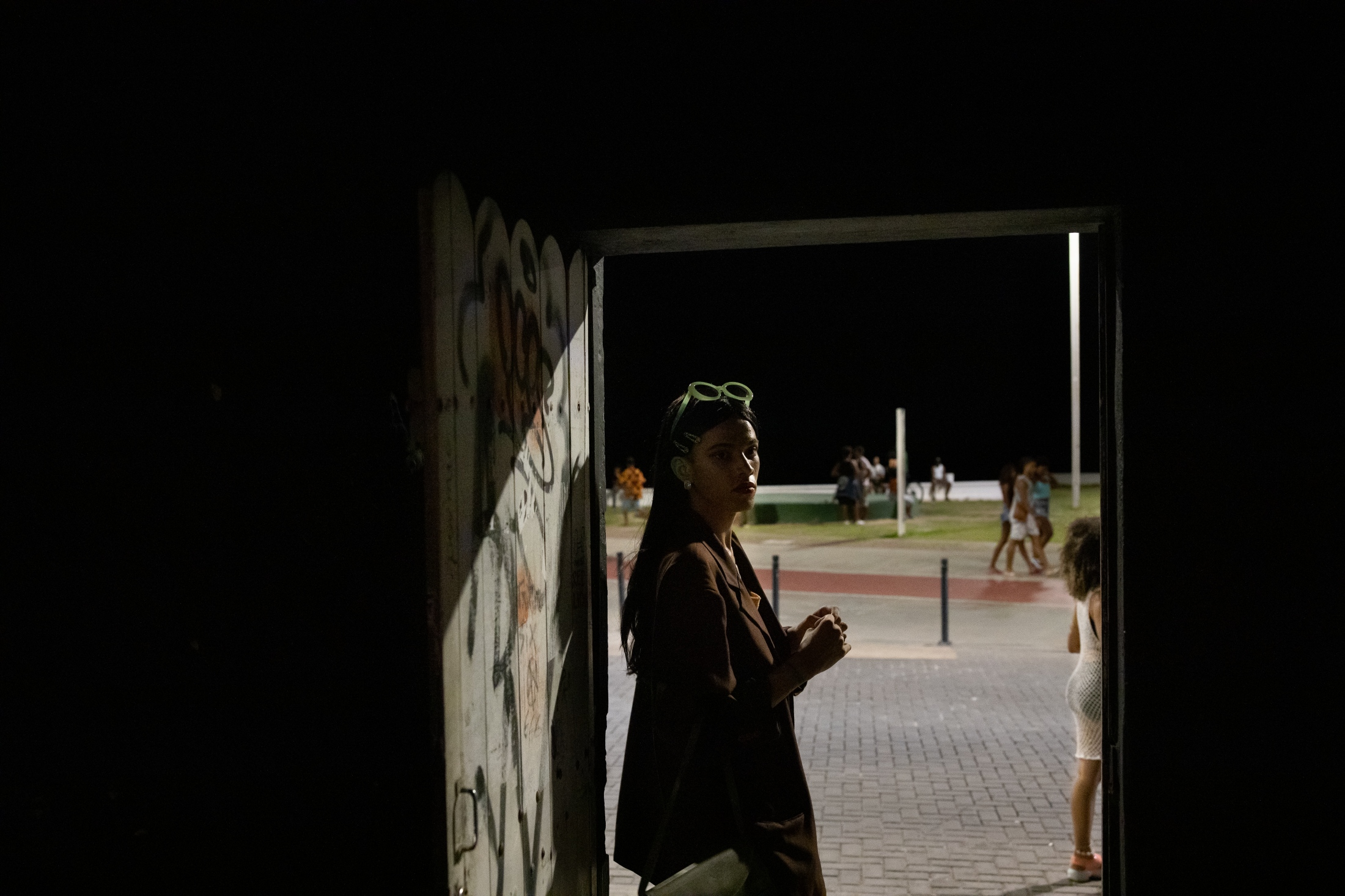 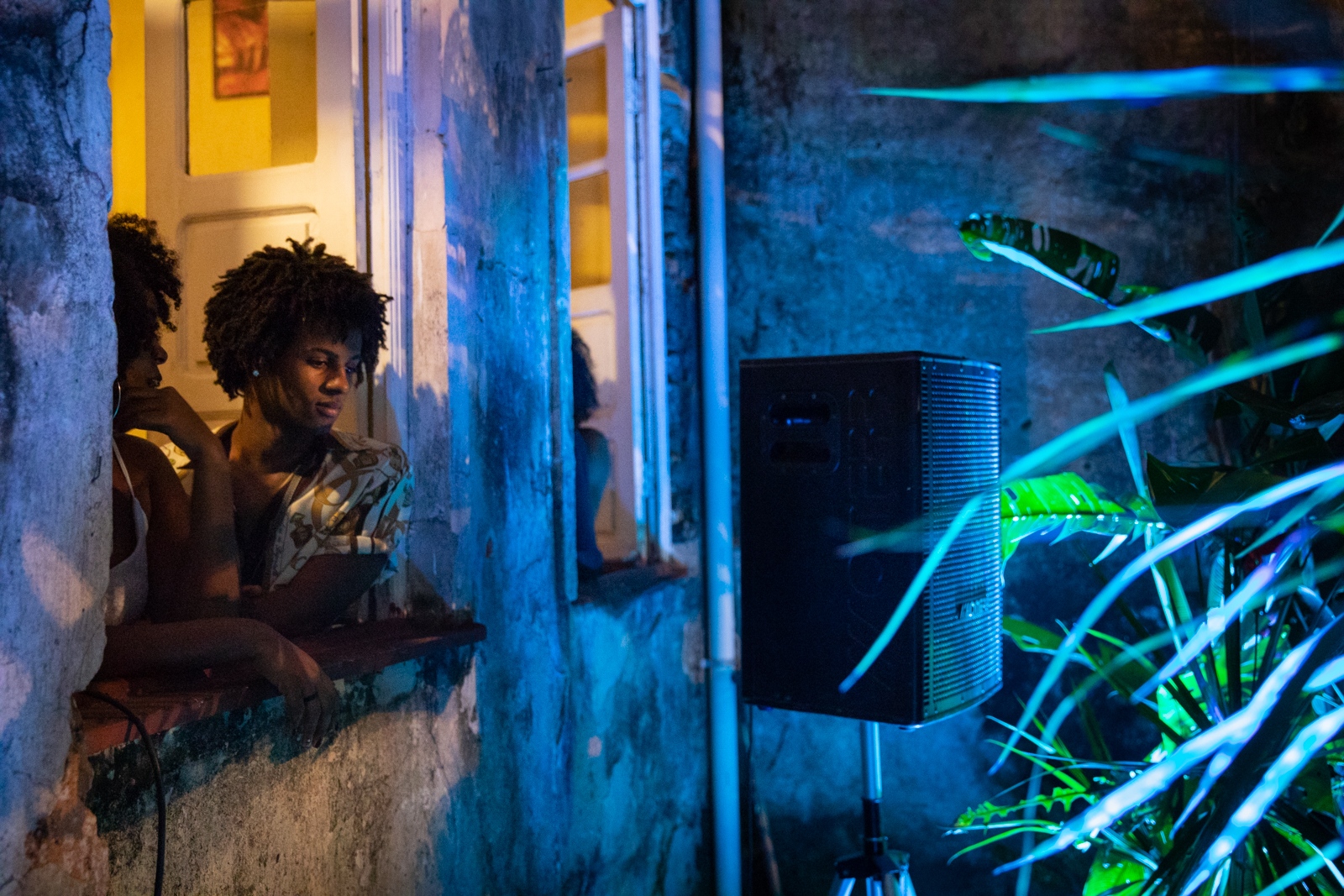 Batekoo is an important and significant event also for being the starting place and moment for the Tombamento generation. The generation name came from the Funk Music from Carol Konka, "Tombei". Carol Konka used the expression "Tombar" - used to express when a policemen kill a young Afro-Brazilian - positively, turning the expression into the sense of empowerment. Salvador, Bahia. 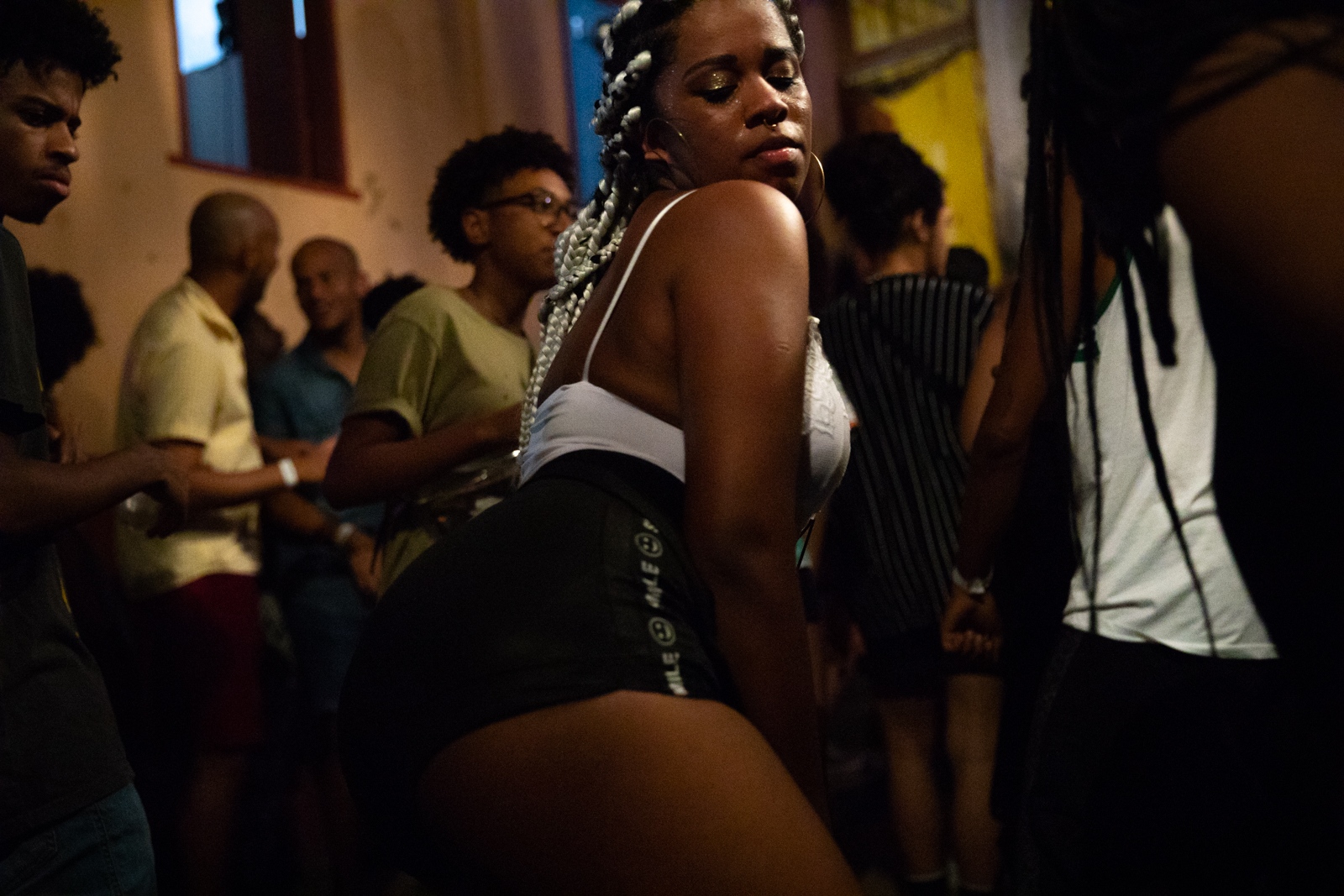 Lidianne Rodrigues, 22 is a teacher for children and History student from Brasilia University and was visiting in Salvador. She frequents the Batekoo party in Brasilia and in always try to go at these parties when travelling. Her life theme is: fight as a Black Woman. Salvador, Bahia. 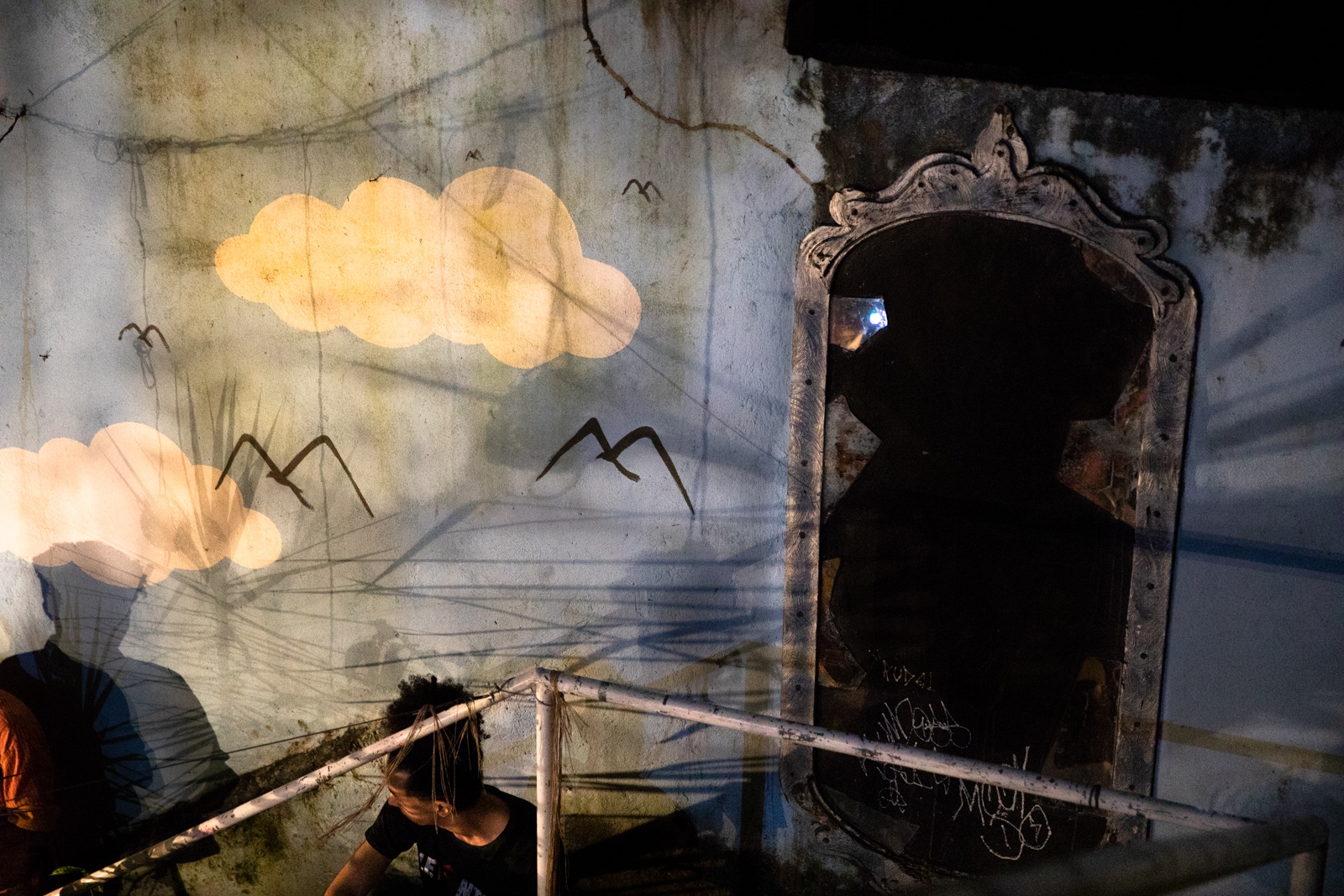 A wall at Batekoo party in Salvador. 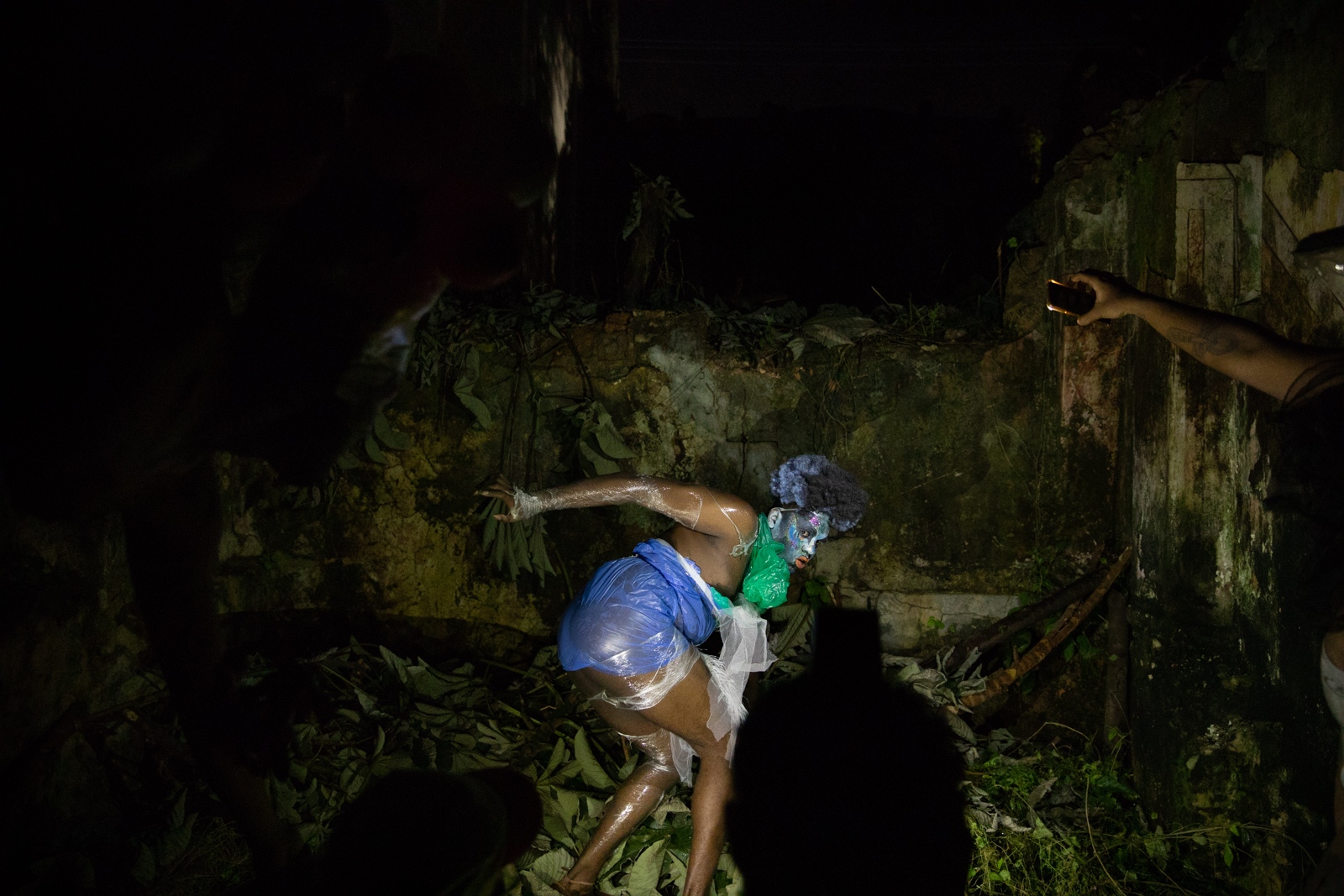 The Coletivo Monstras created Drag Queen personages as if they were from other plant just arriving on Earth. Here, on of them poses for a photo shooting dressed as for the show.