There is an economic world that has gained new strength since the Covid-19 crisis. It is the one of the small distribution of agricultural products (known as zero km). Fruits and vegetables pass directly from the producer to the consumer travelling by the small trucks that bring the "baskets" ordered by web from home, or through the improvised street or square markets where you buy directly from the pickup truck. And there are some intermediary companies like “La Ruche Qui Dit Oui” who put in touch producers and consumers: the 80 per cent of the income goes to the producer. In  this period “La Ruche Qui Dit Oui” has gained something like 300 new producers and 37 thousand new customers all over France.

In France - explains Arantes - the quarantine was declared on 11 March and since then the street markets have been closed and the supermarkets have become one of the most undesirable places to go . But large-scale production went into crisis due to the non-arrival of seasonal workers from Poland, Morocco and Spain. Farmers are in great difficulty and among them there has been the highest suicide rate due to the agricultural business crisis in France.

The small producers, on the other hand, got organised since few years already and, with the covid19, they became an important source of alimentary products and security and, during the quarantine: Production and commerce have even increased sixfold .

This kind of economy has been growing considerably in France and the quarantine proved that it is is much stronger then we suspected: it can supply food for a city as Paris and keep alimentary safety (with food quality and no chemistry) during a pandemic situation as this one. And many people who used to work on urban employs are moving to the small agriculture business in France. As it is the case of Sophie (on the images) whose husband was a business man and they used to live in la Defense (the business neighbourhood in Paris) and are now one very active producers on organics small agriculture. The Saint Thibault dairy farm is good example of this new quarantine economy. The production of this farm situated in the Marne valley Seine et Marne not far from Paris has been multiplied by 6 since the beginning of containment. And this reality is practically the same for all small producers and family farming networks. 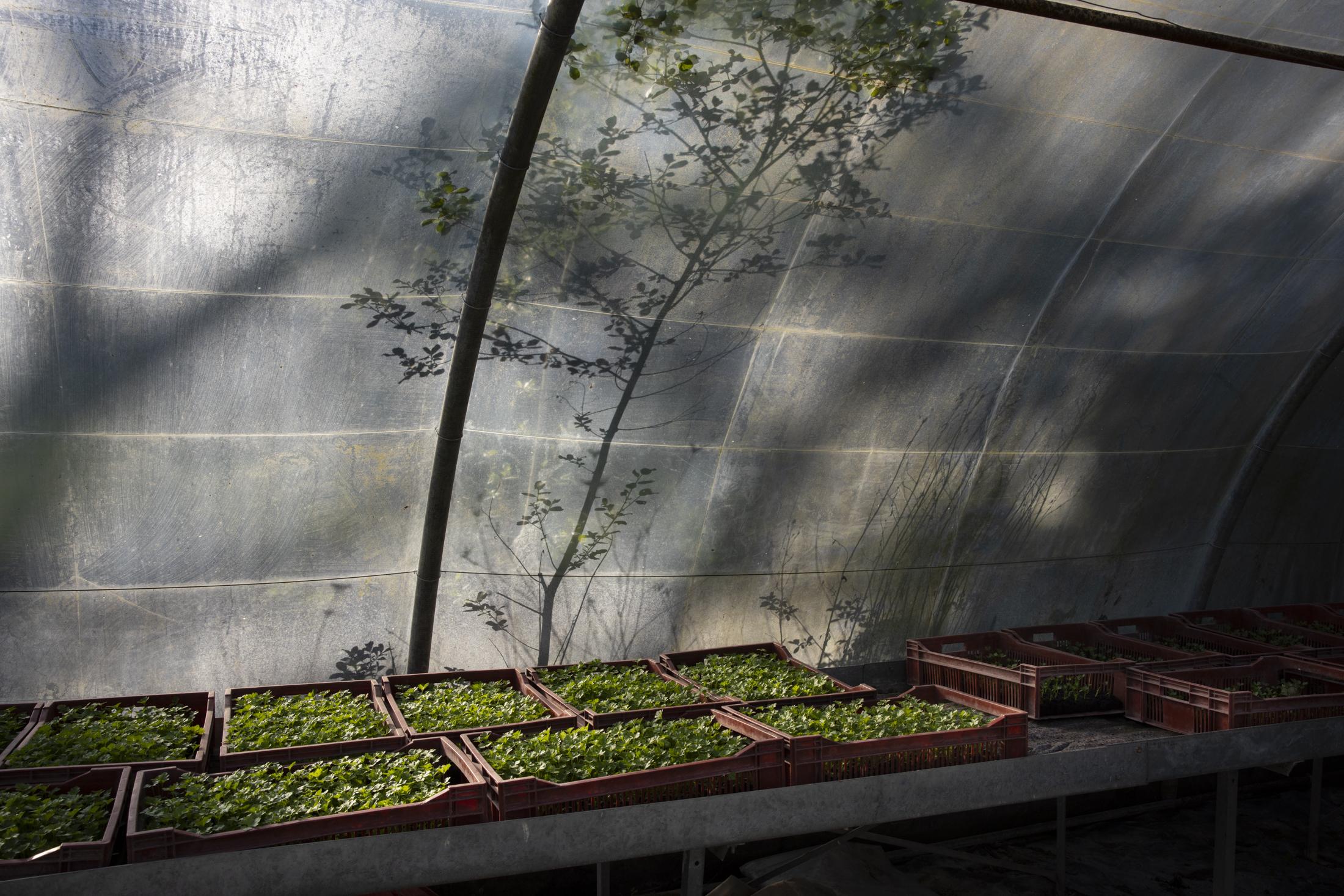 The greenhouse of La Ferme des Millonets, with the fleas that will be planted for this summer's harvest. Mantes la Jolie, Ile de France, France, April 2020 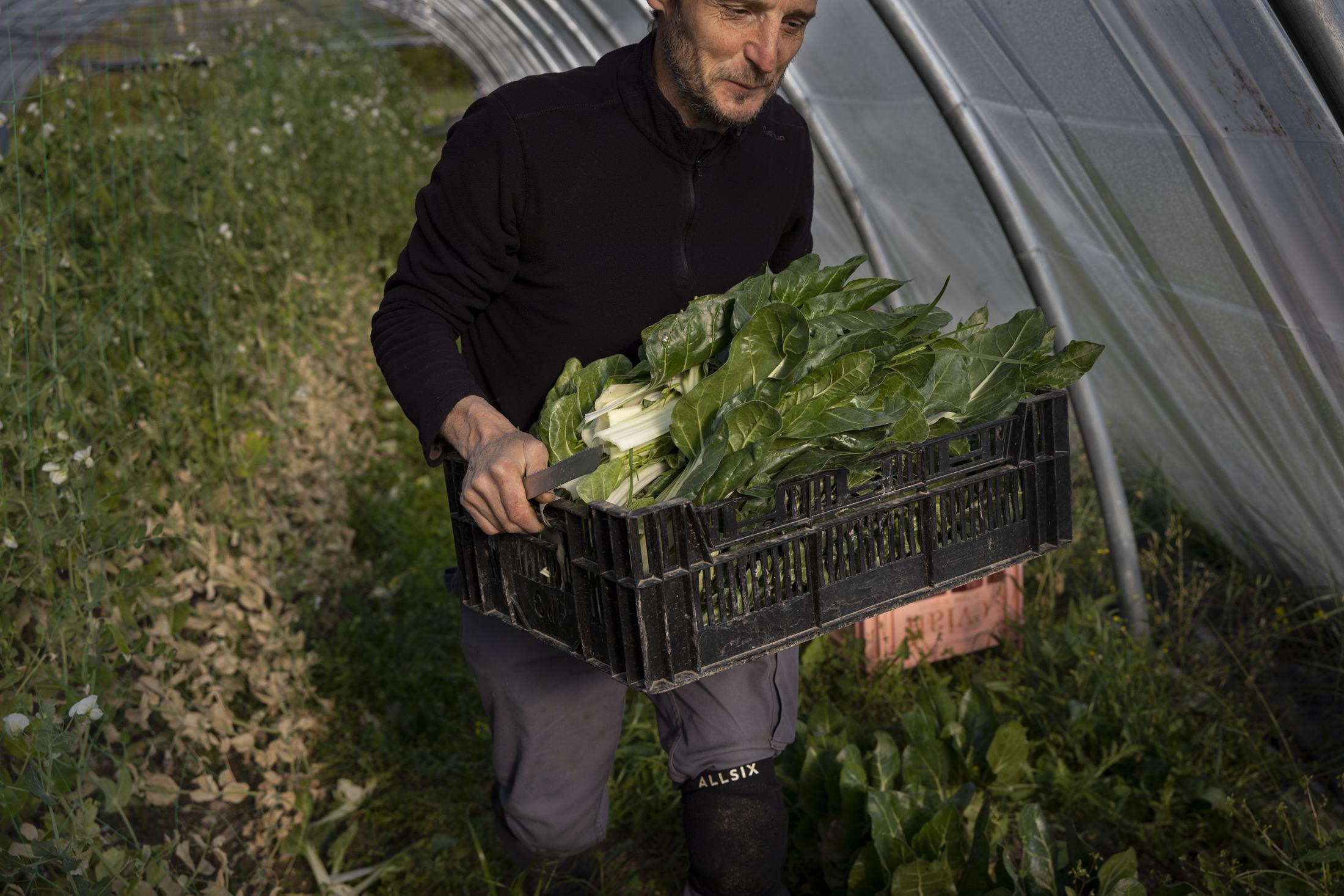 Yves-Anne Auffret, 50 harvest the chard for the distribution of baskets to the AMAP network. Yves is in market gardening after a 2 years specialization at BPREA organic gardening school in France. He is training at the Ferme des Millonets where he has the right to practice the profession in complete freedom until he can have his own farm. Finding a small land in Paris regions is very hard. The region is surrounded by big cereal farms and the land lords are not opened to seel parcel to small producers. Mantes la Jolie, Ile de France, France, April 2020 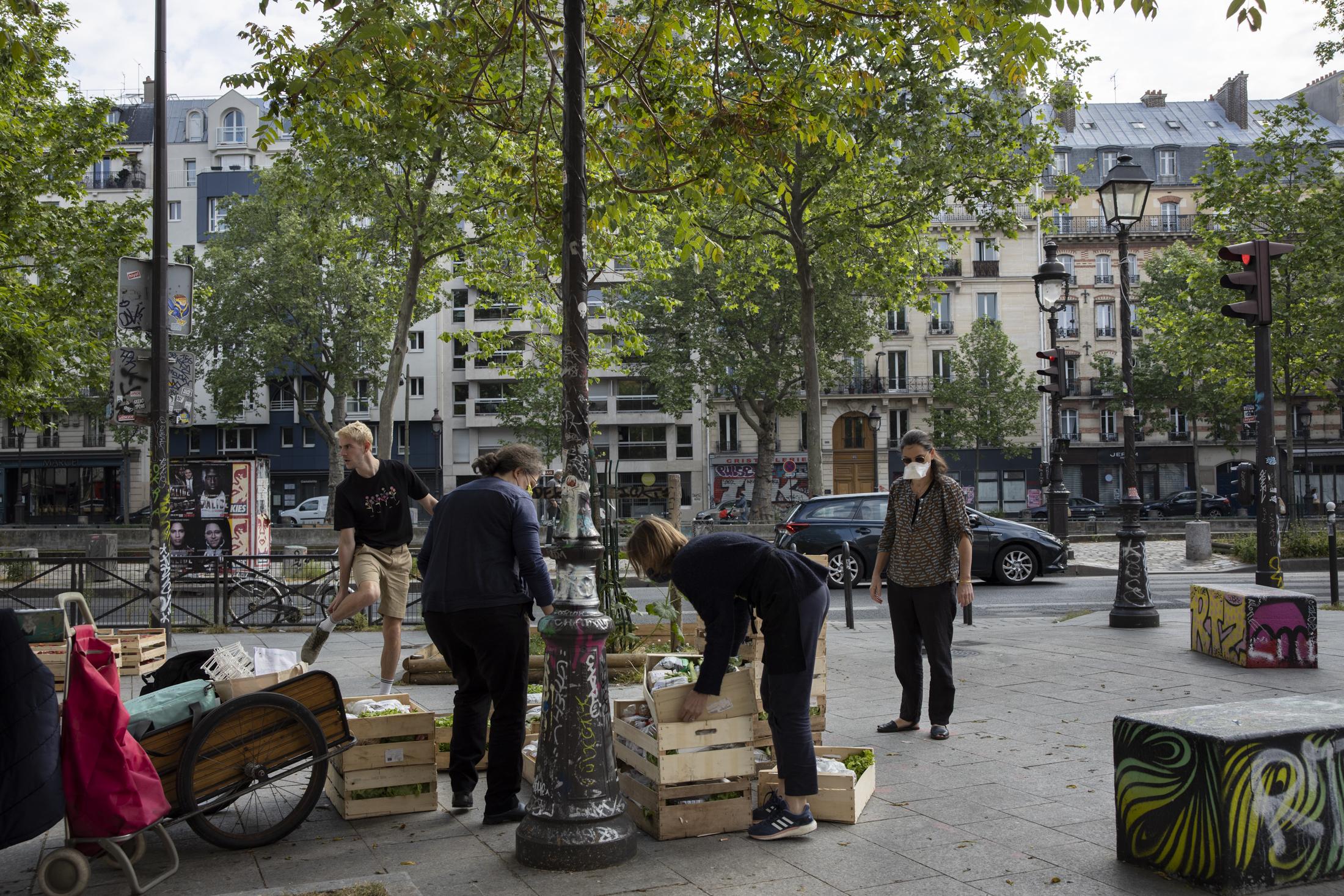 The baskets of products unloaded on the Place du Quai Valmy in Paris before the opening of distribution by La Ruche Qui Dit Oui. More than ten volunteers come to work in the sale and distribution of baskets during quarantine. Hundreds of people pass by during the distribution, some discover the services and the interest by the networks like that of the Hive is in full rise in France. Paris, France, April 2020 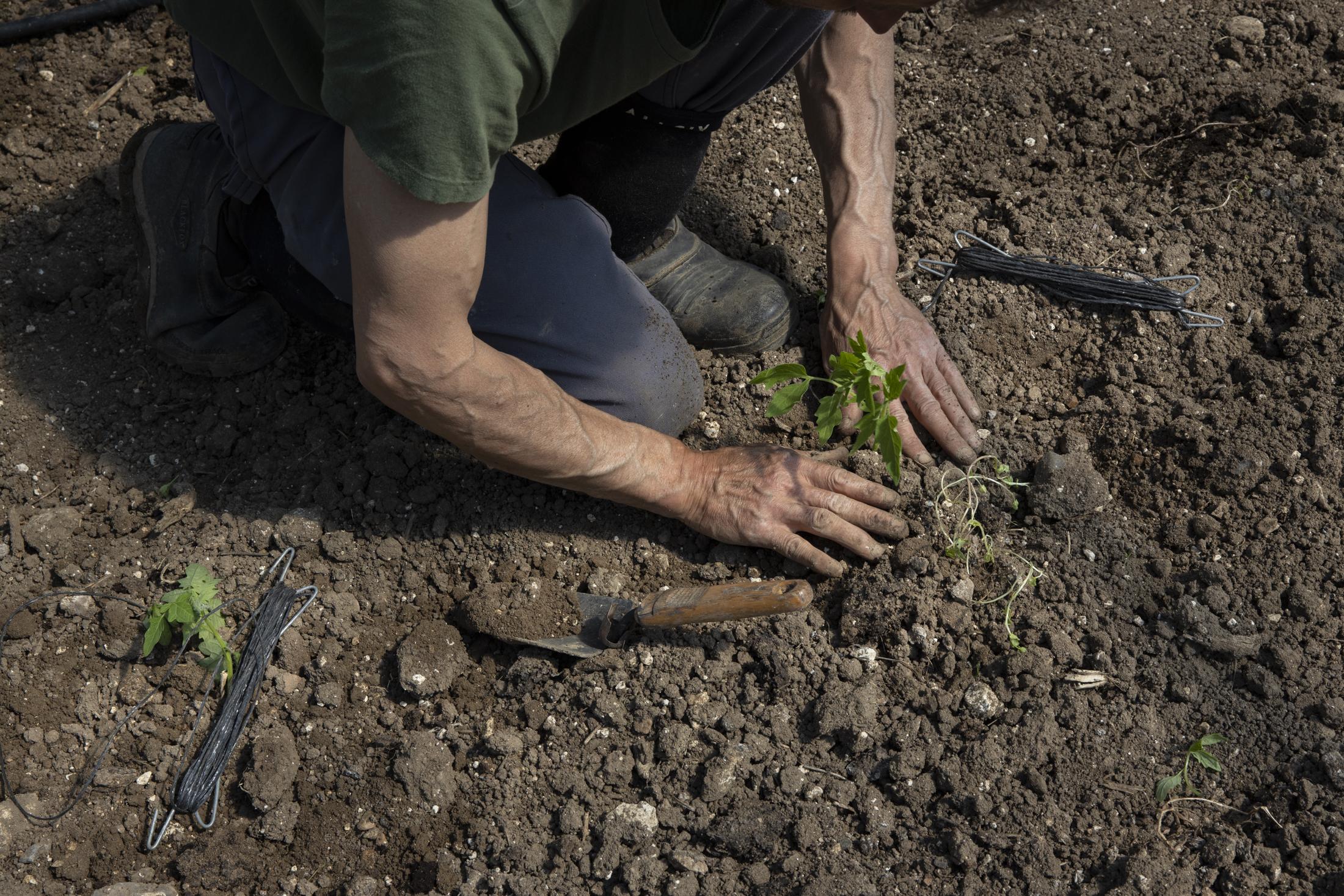 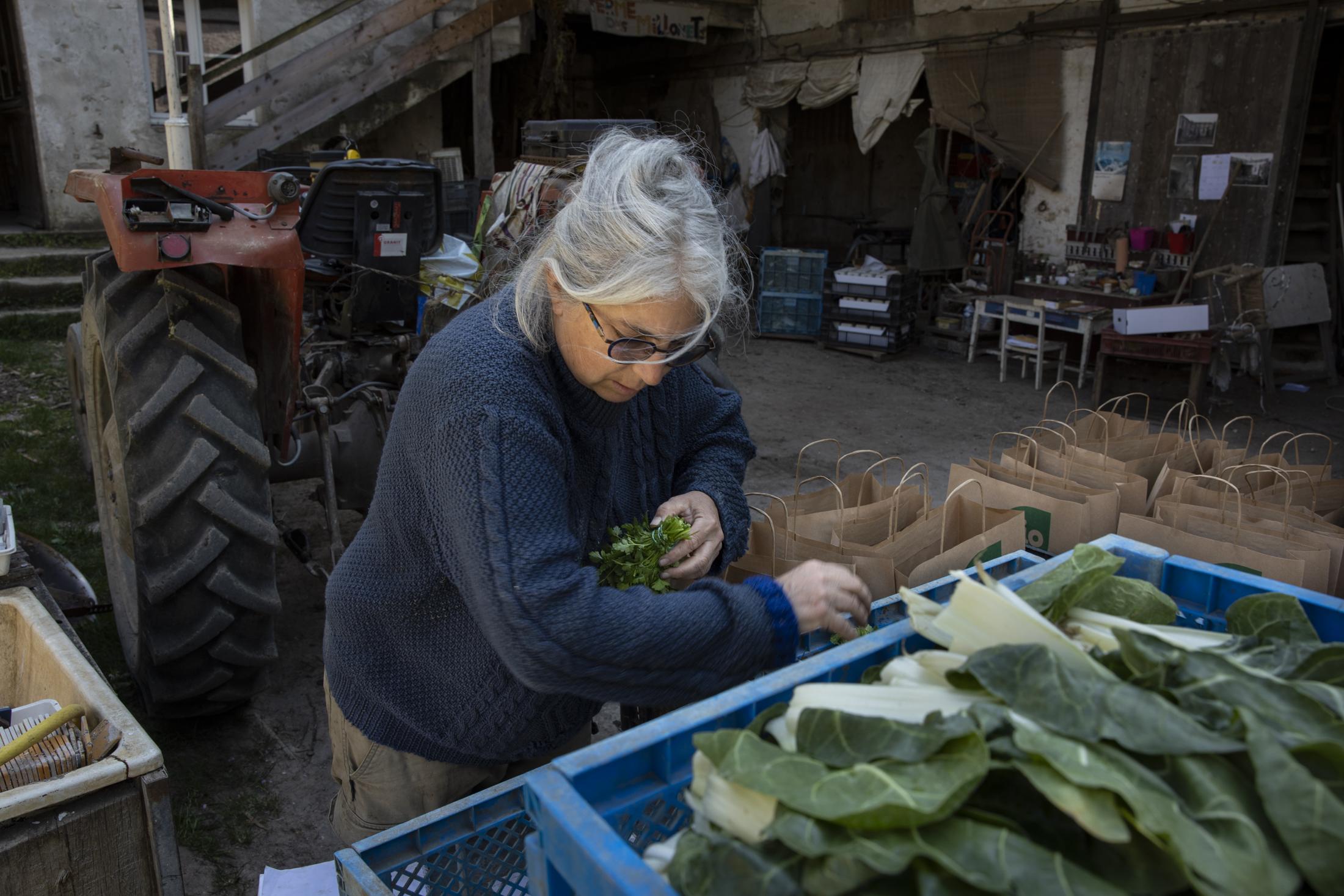 Sophie Dutly, 59, is handly preparing vegetable baskets on her farm which will be distributed in Paris this afternoon. Market gardener, Sophie joined the network of small producers AMAP in 2005, when there were only 33 producers in Ile de France. Today the network of this region counts with more than 250 producers. Sophie makes all the necessary effort to produce without agrotoxic, but the big cereal productions of next door use it. For her, the pandemic is an opportunity to reflect on the agricultural transition in France and the big challenge will be to maintain new customers for products from family farming. Mantes la Jolie, Ile de France, France, April 2020 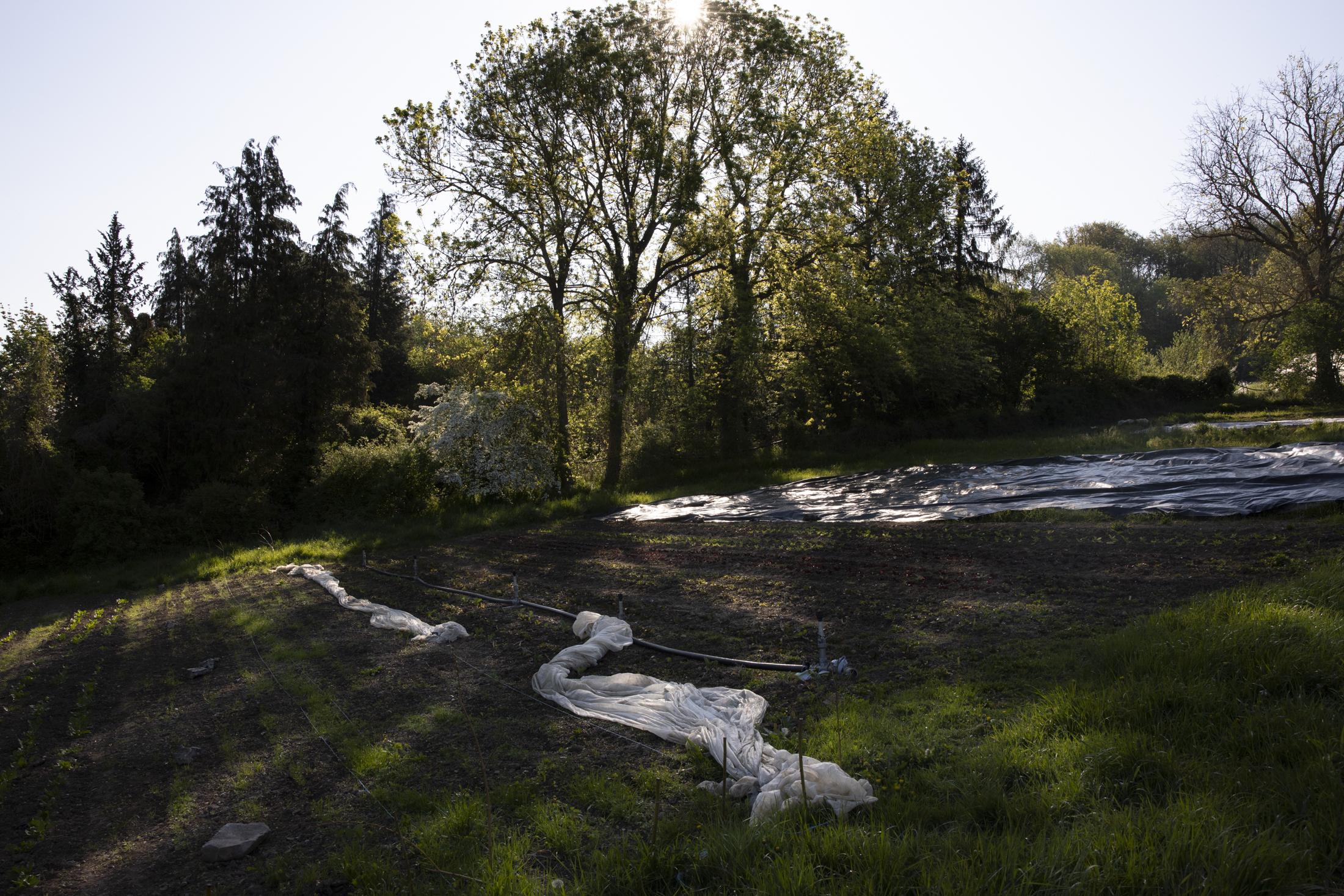 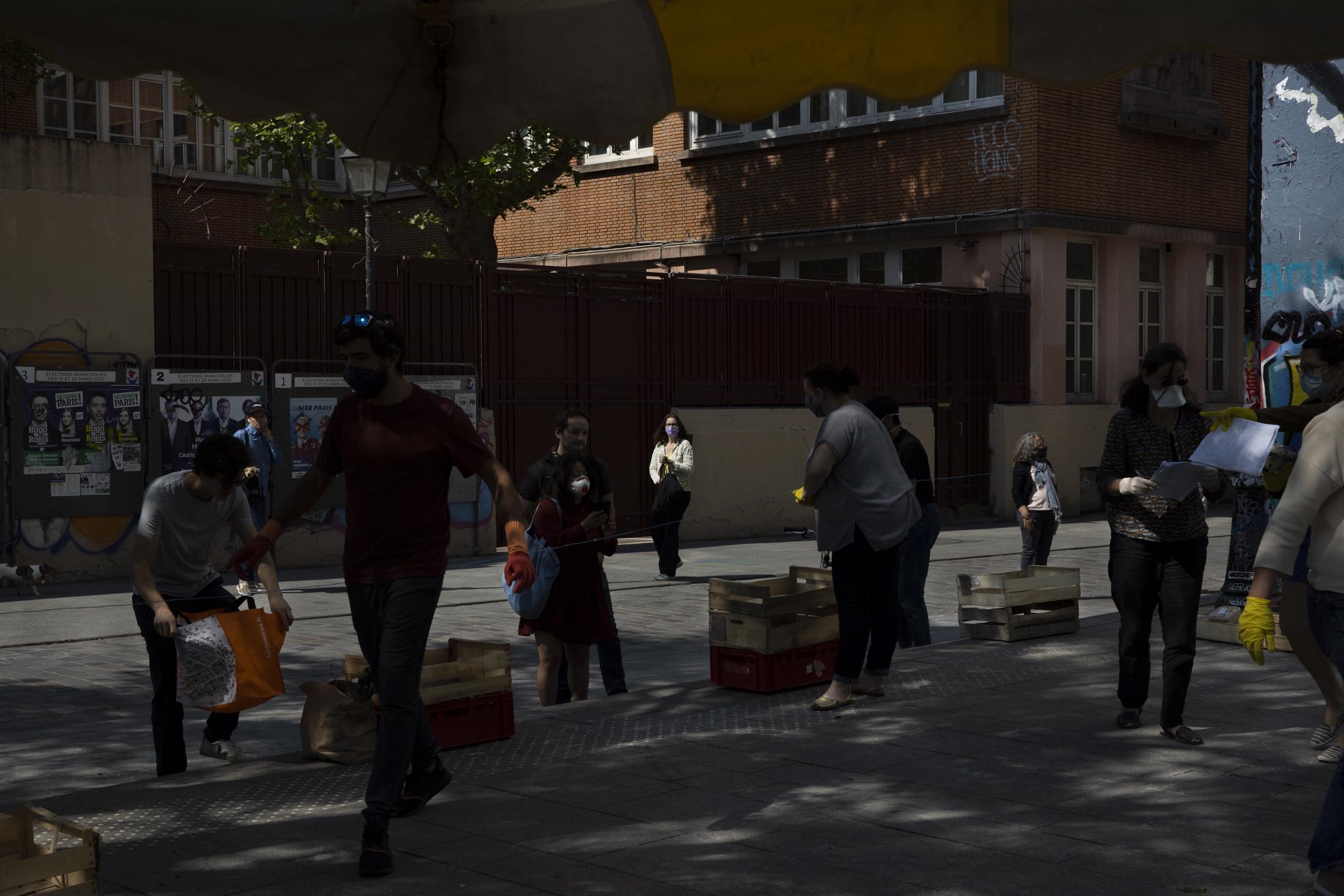 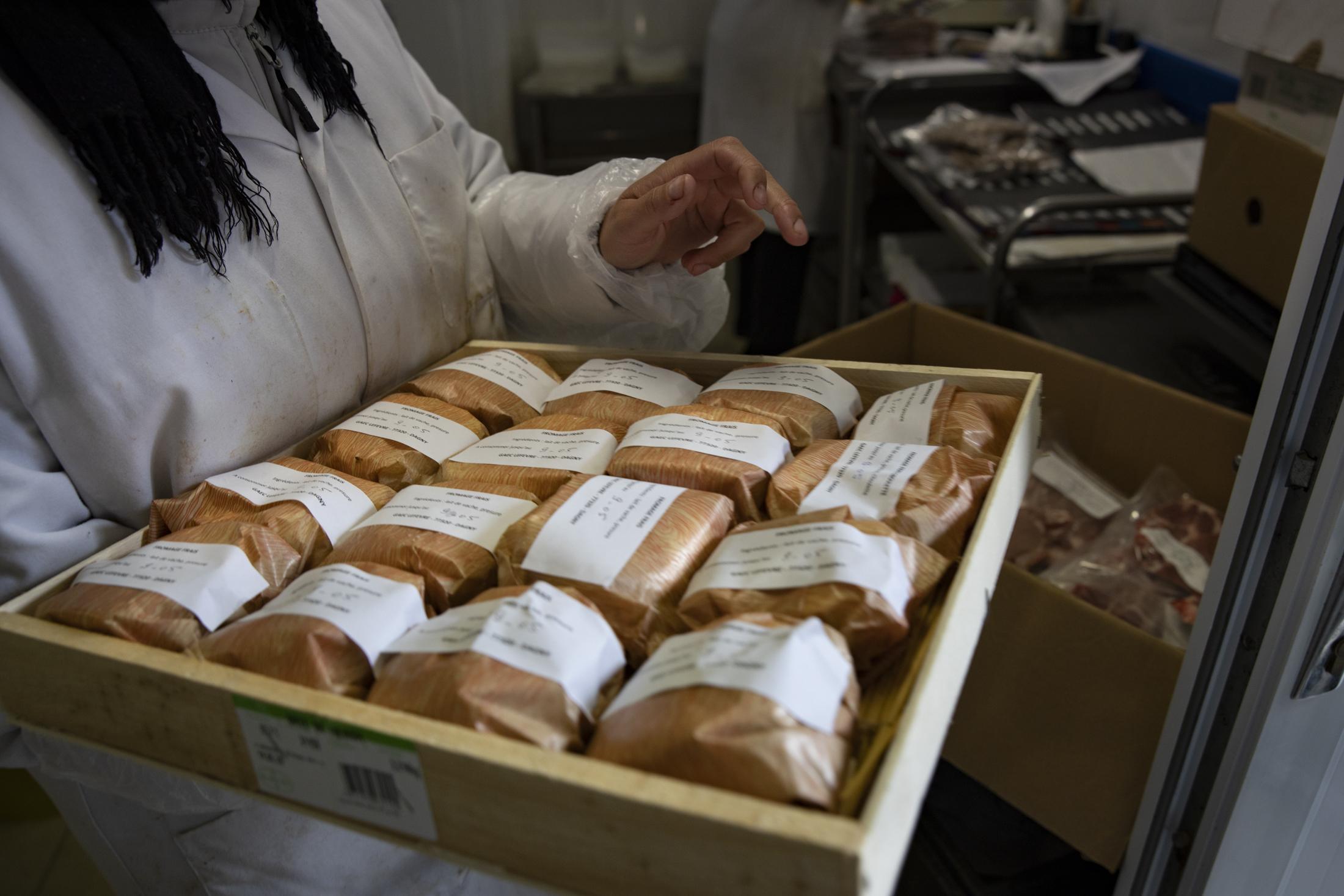 At Les Ferme des Meneuse, an employee counts the number of cheeses to send for sale in Paris. According to the employees, the work has doubled, they work 14 to 16 more hours per week. 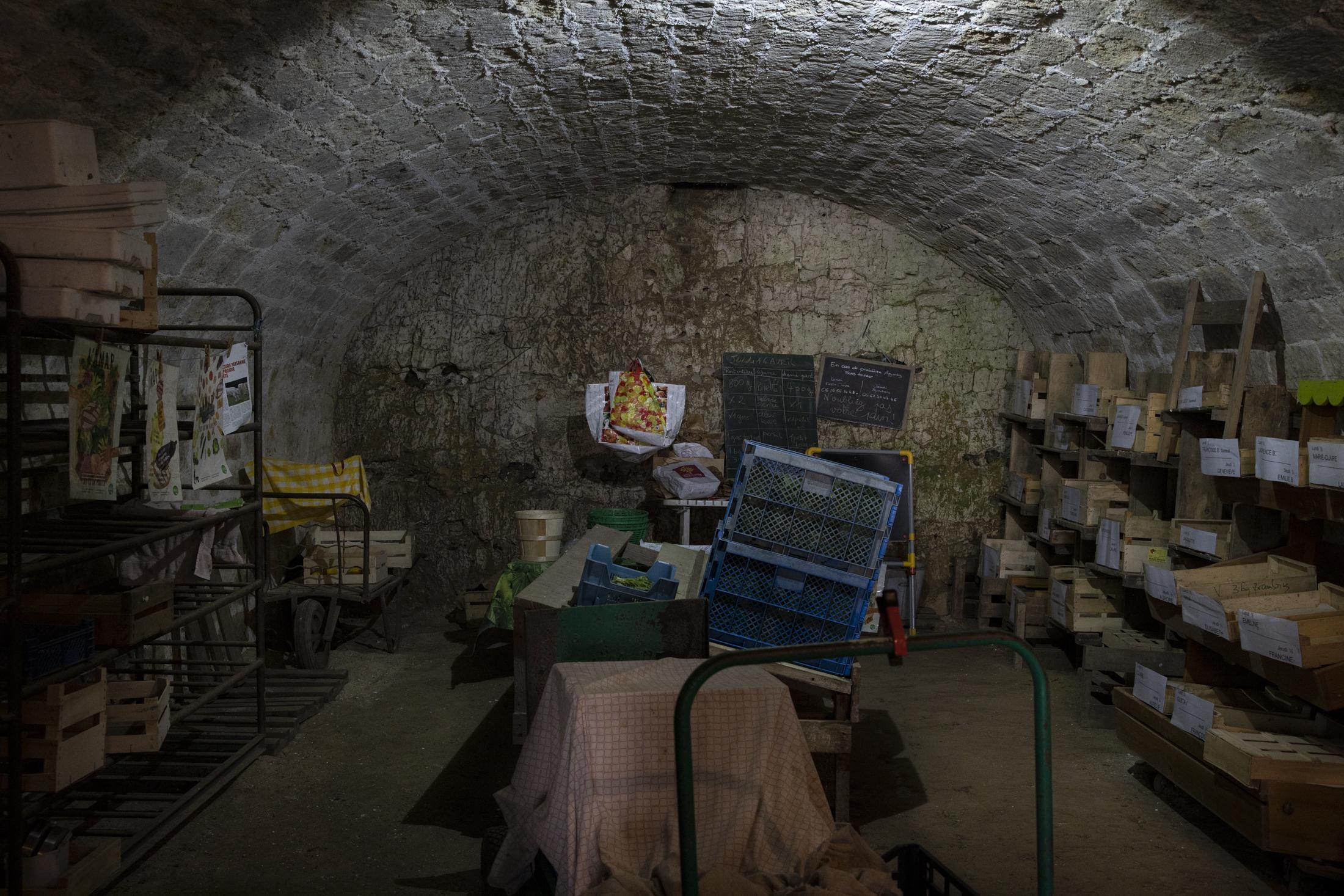 The cellar of La Ferme de Millonets in addition to granaries for vegetables is also the place of sale of their products to the villagers. Each week, customers from nearby villages come to pick up their vegetables and vegetables and bread, produced on the farm. Mantes la Jolie, Ile de France, France, April 2020 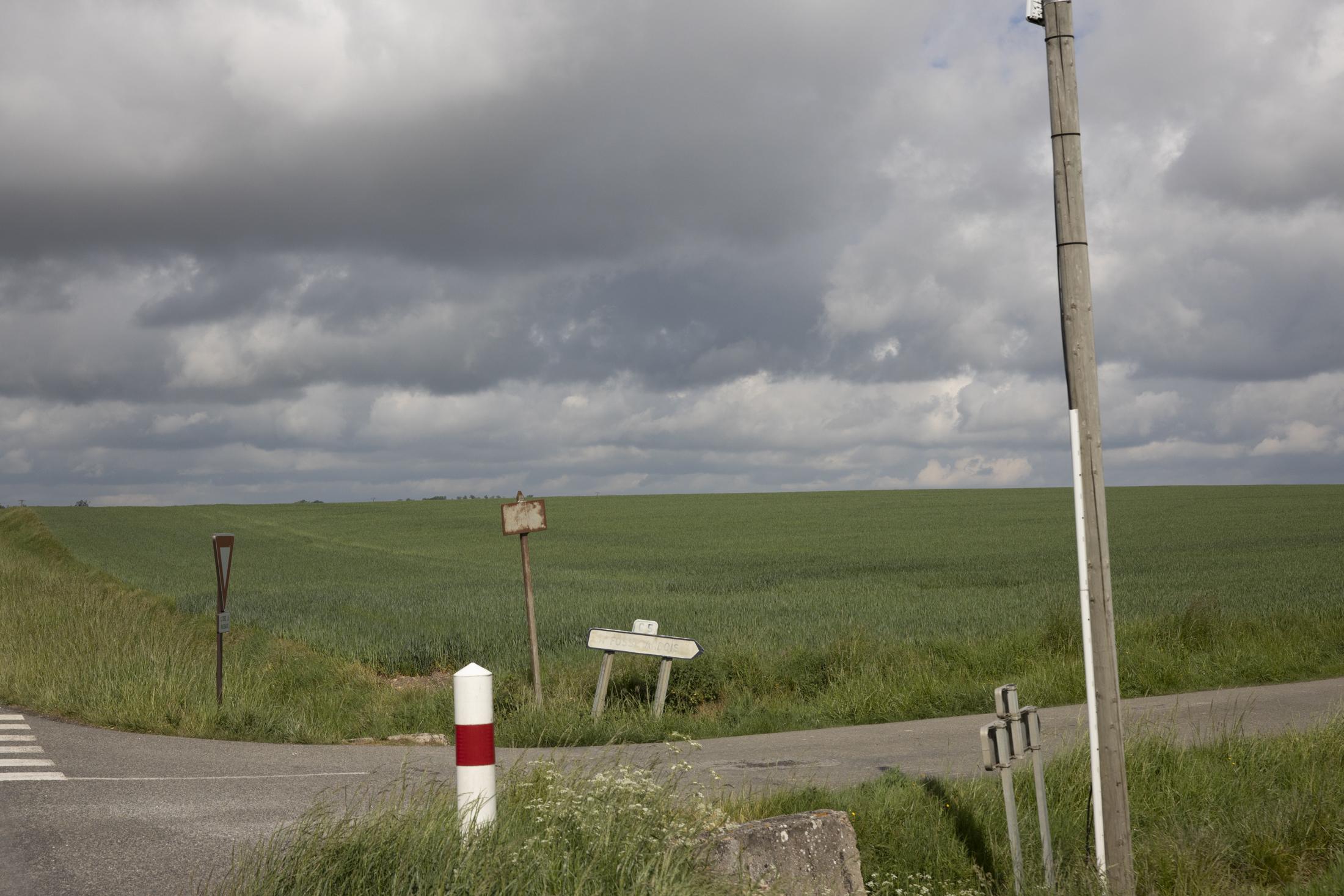 A large field of intensive agriculture in the Seine et Marne area. This area occupies 60% of agricultural production in the Ile de France region, the vast majority of which is used for the production of cereals. Small farmers "hide" behind large farms, many of their production being affected by the pesticides of large companiesLa Fosse Arbois, Seine et Marne, Ile de France, France, April 2020 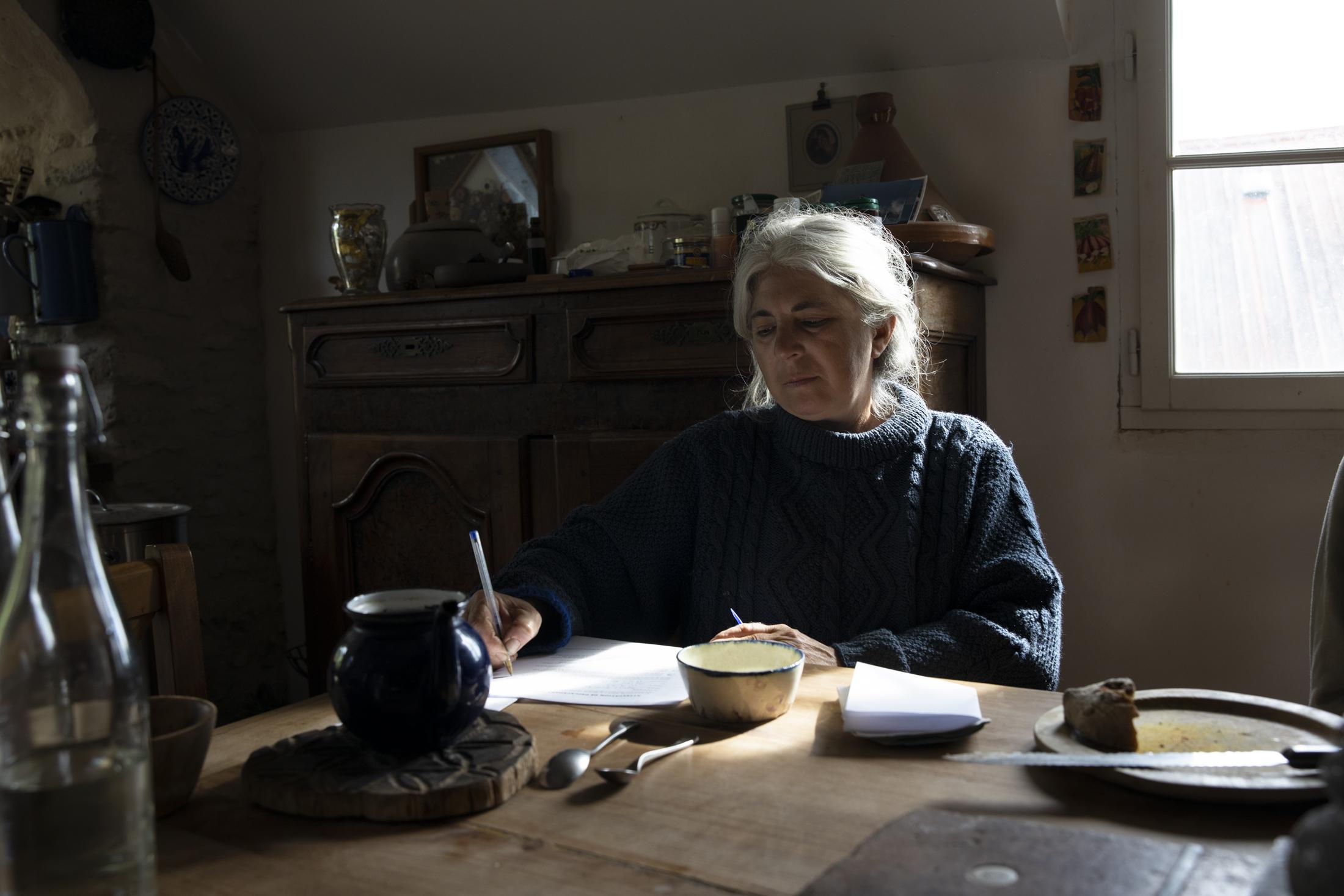 Sophie Dutly, 59, fill in your departure document to go to Paris to take your products. The document is mandatory during quarantine and a fine of 135 € is given to those who do not have their documents and justifications in hand. 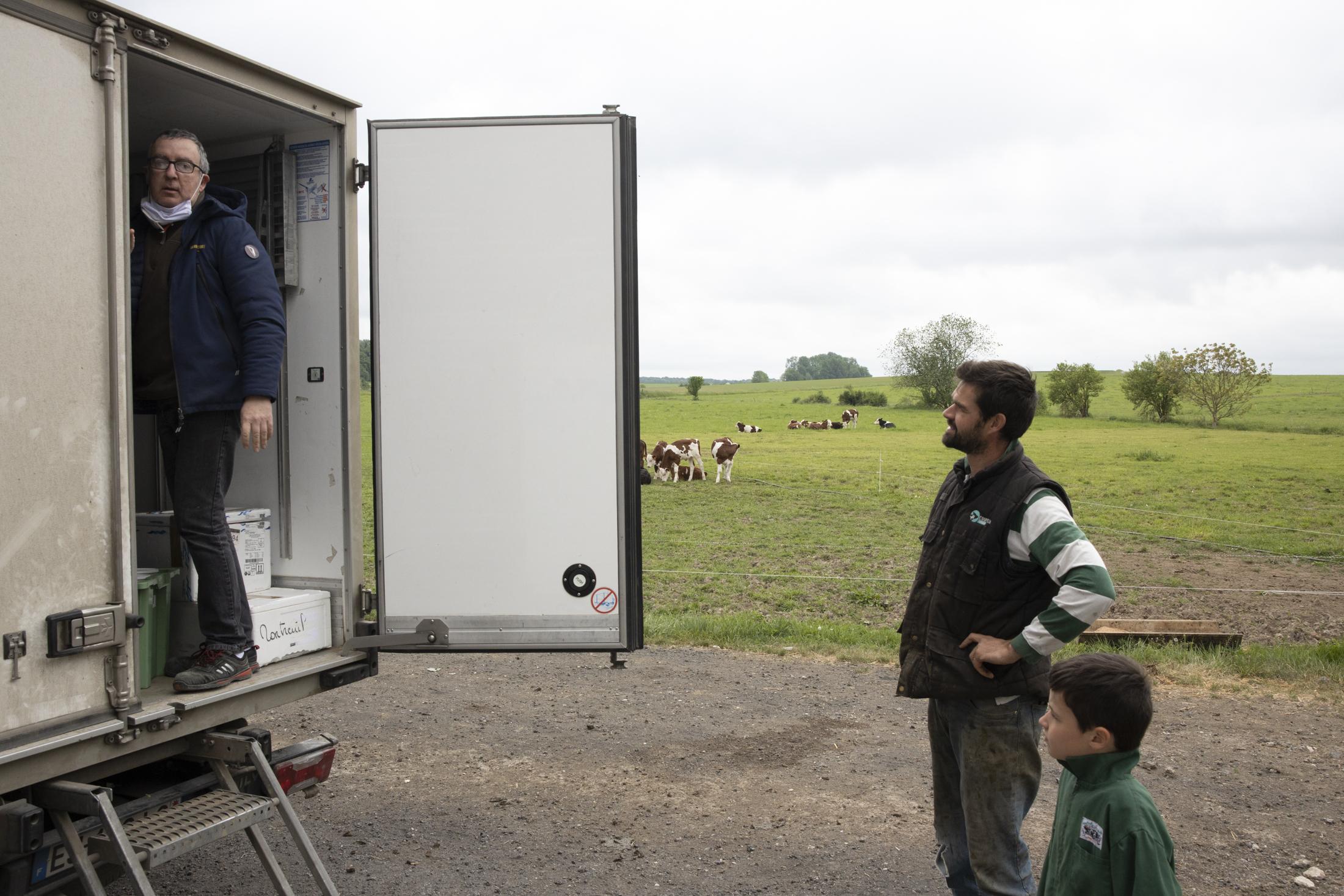 Norbert Terrais, 58, is one of the carriers of farm products for La Ruche Qui Dit Oui. Norbert toured the farms near Paris by harvesting their products for distribution in the city. Sometimes he makes 17 visits a day. Here he talks with Mr. Nicolas farmer at Saint Colombe farm. Nicolas provide organic cheeses and dairy products for many different distributeurs. Nicolas, ex former computer scientist, converted to food transport and is delighted, for contact with nature and a more harmonious lifestyle.Saint_mars Vieux Maisons, Seine et Marne, Ilede France, France, April 2020 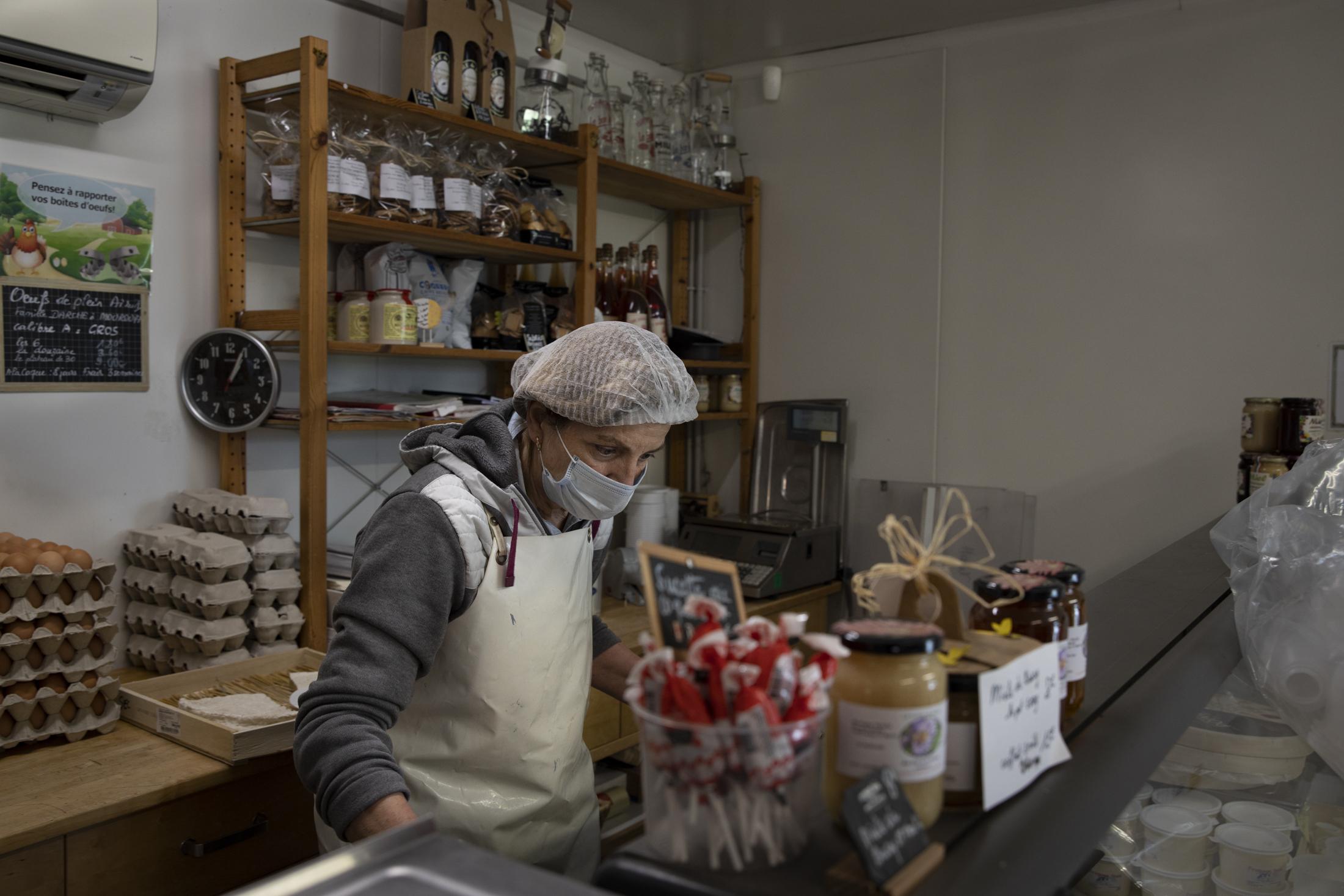 Brigitte Brodier, 54, make the last accounts of the day before opening the shop in the Saint Thibault farm in Brie Picardie. Currently managing the family farm, specializing in dairy products, Brigitte worked in fashion in Paris before. "We are exhausted, we work sete days on sete, 12, 14 hours a day. I do not want to contract staff because I am afraid of putting people at risk". Before the quarantine his trade was going very well, but with the health crisis the sale of his products increased by six times. Saint Thibauds des Vignes, Seine et Marne, Ile de France, France, April 2020 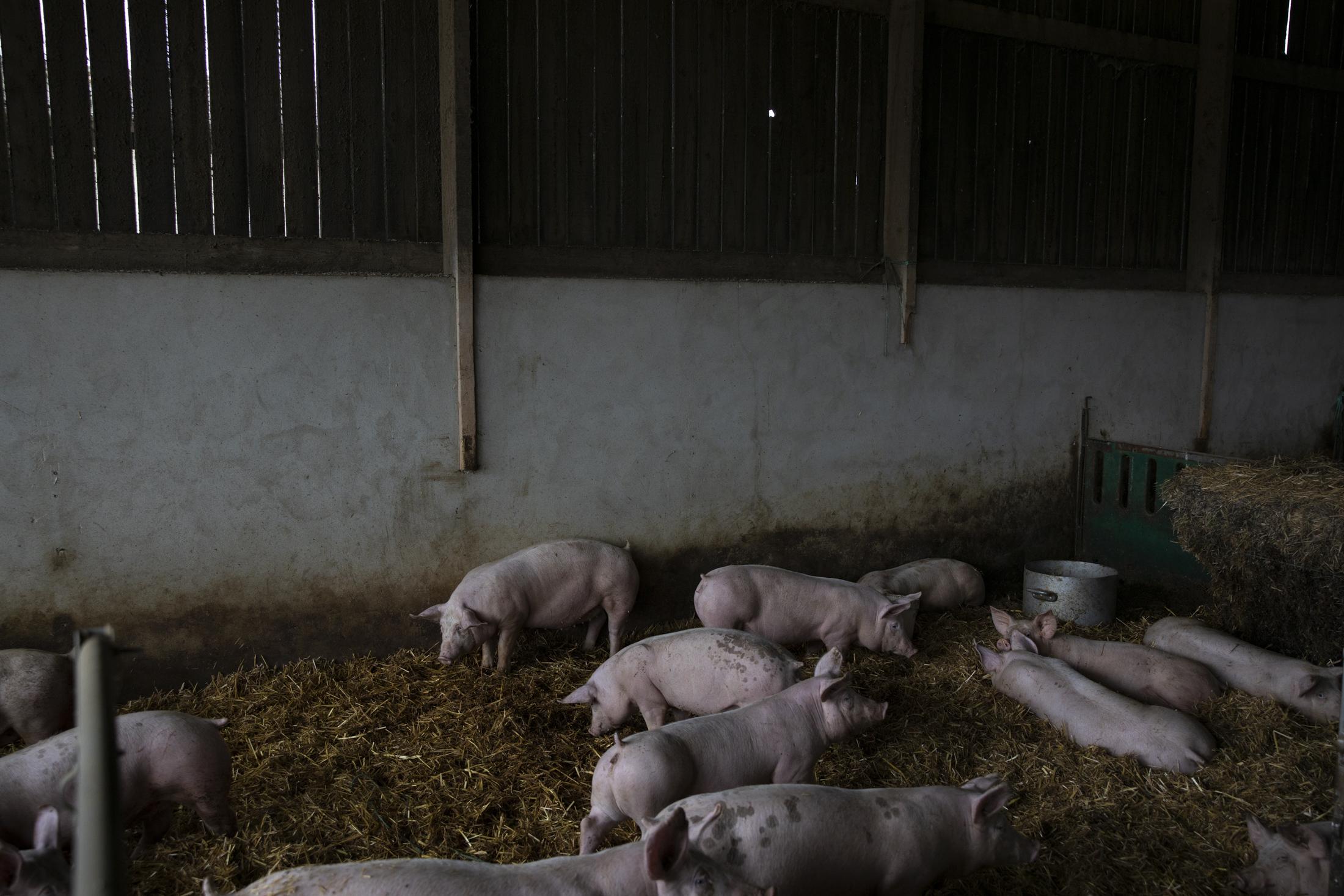 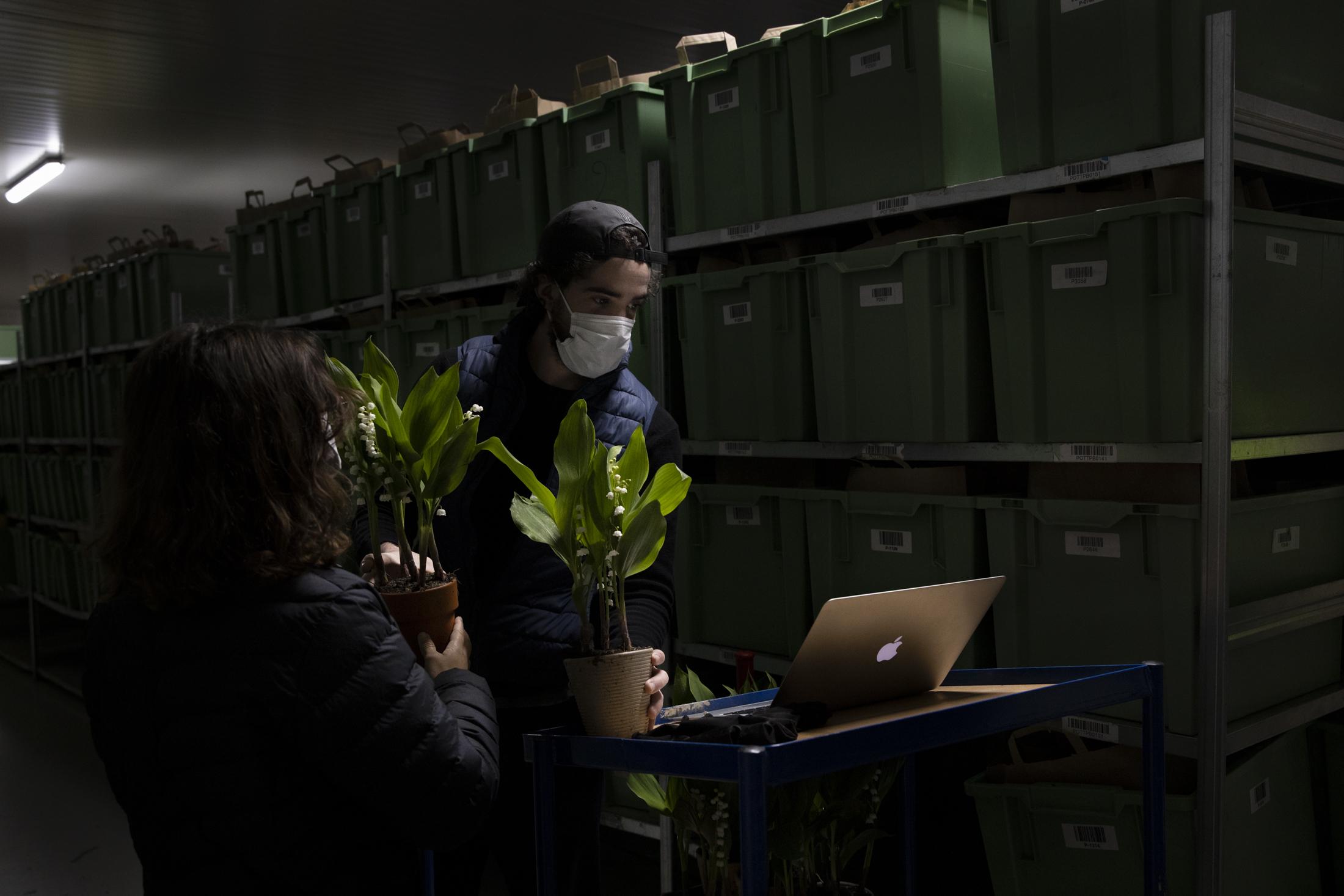 The team of workers at the Comptoir Local distribution warehouse - product distribution network for the La Ruche Qui Dit Oui company - records all product entries and exits in a precise computer system. Since the start of quarantine the warehouse has been working 24 hours a day, every day of the week. The sale of baskets went from 150 baskets per day to 700 baskets per day, a considerable increase maintained thanks to the efforts of small producers to produce more and the entry of new suppliers. Behind the workers, the shelfs of boxes containing the online shopping to be delivery on the day. La Courneuve, Ile de France, France, April 2020 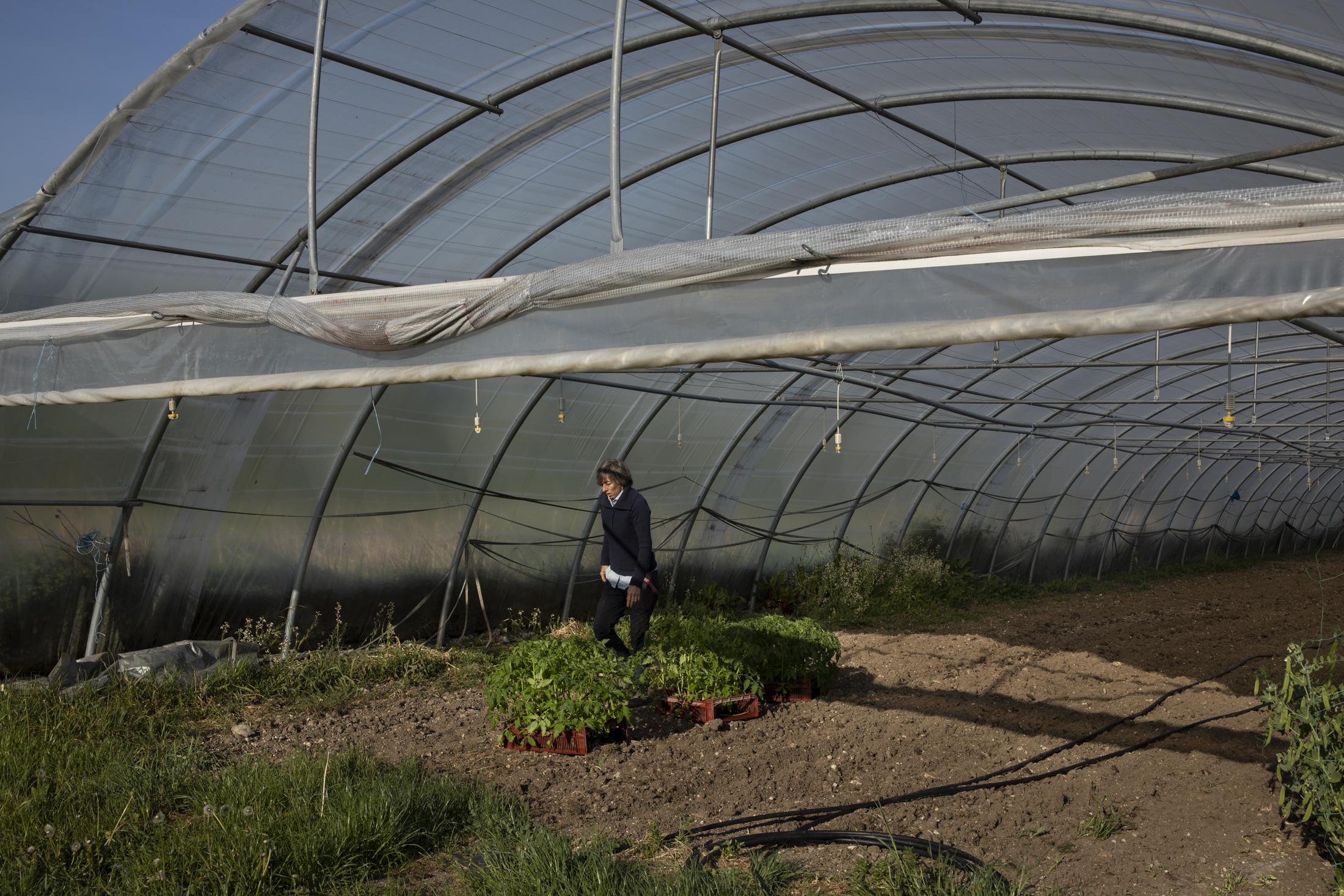 Anne Monnier, 49, worked as a decorator for luxury hotels and events before making a conversion to the agricultural administration at BPREA, one of the best known schools in France for this type of training. His dream of having his land left with experience. "Even if I do not earn much, having a salary is very comfortable. Agricultural production requires a lot of work and responsibility." Anne is an employee at the Ferme des Millonets. 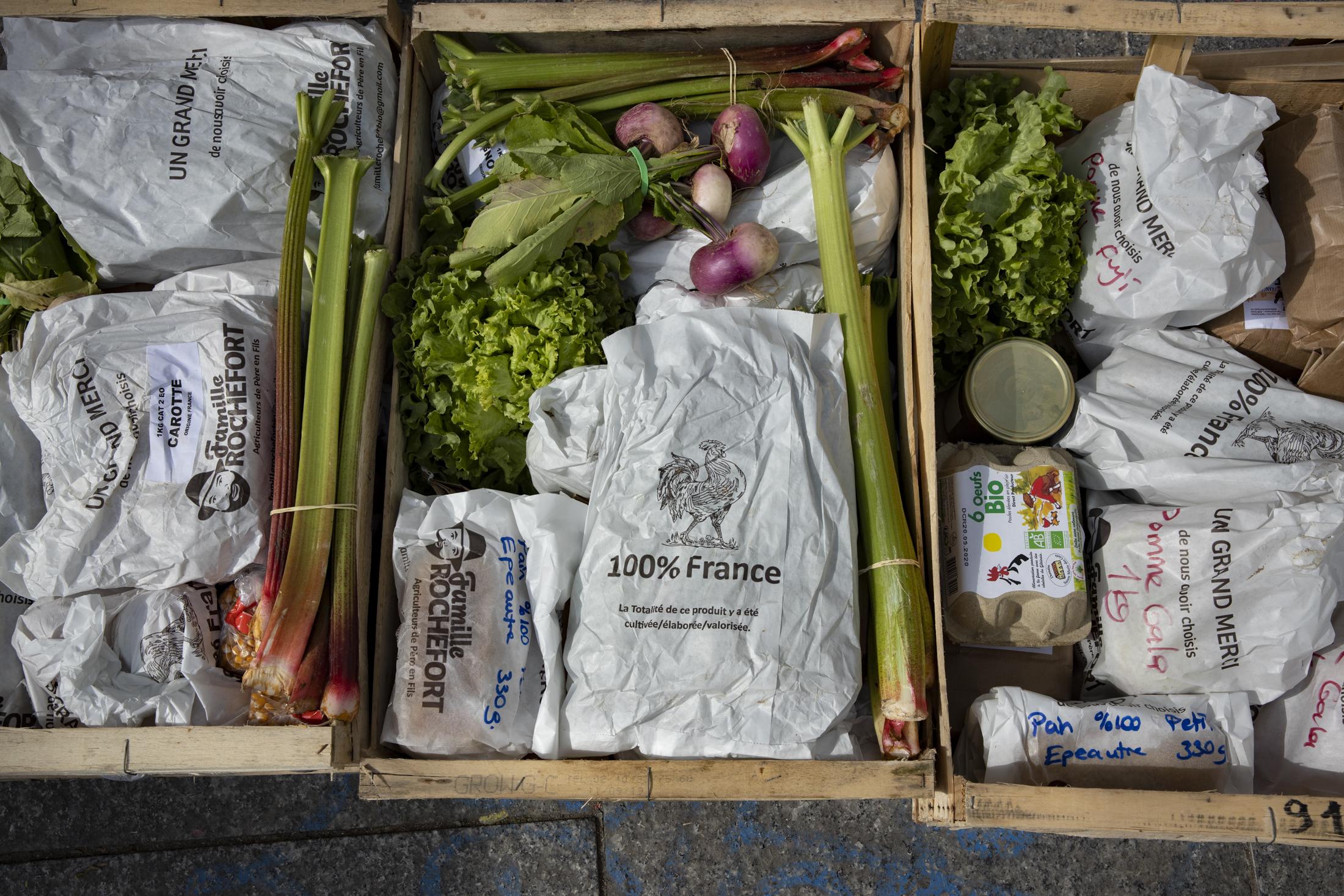 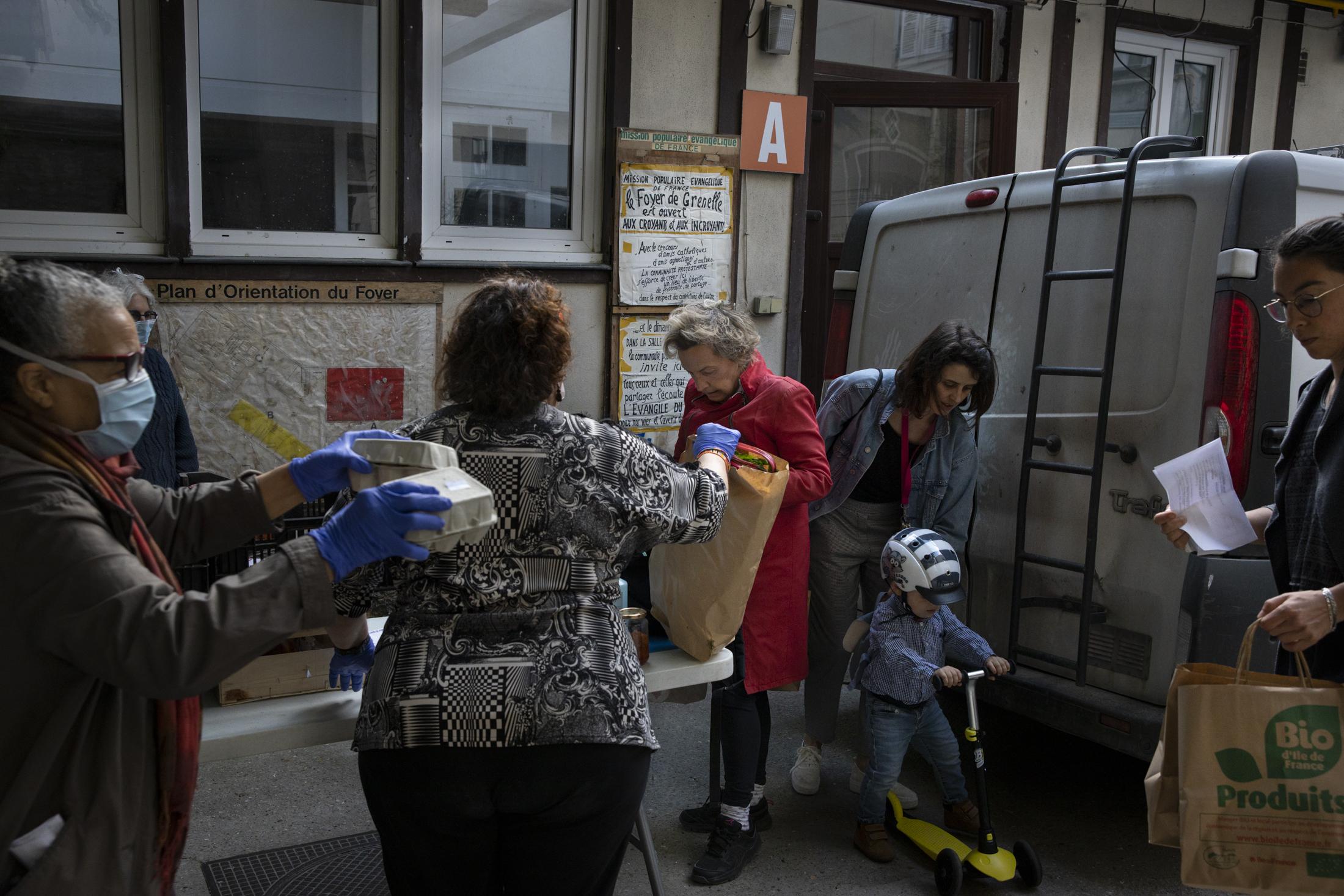 Customers of the AMAP network in Paris, in zone 15 of the city, line up to take their baskets and products of the week. AMAP is an association whose subscribers pay monthly or annually and receive their baskets of local vegetables and fruits per week. This system guarantees the annual sale for small producers who know in advance the number of baskets to supply. 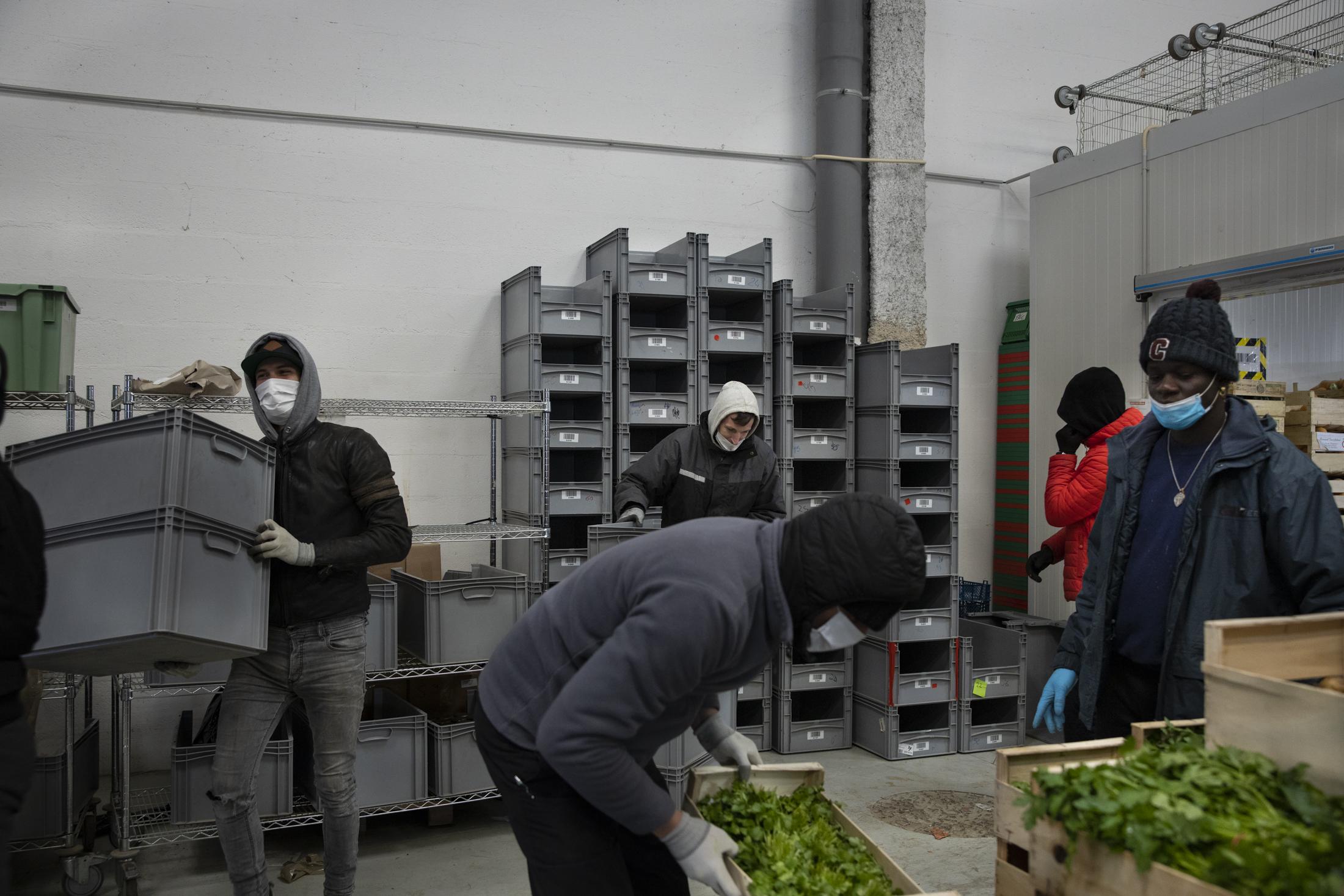 The warehouse for the distribution of local products from La Ruche Qui dit Oui. After the quarantine the increase of the customers and the interest for the local products, obliged the company to increase the number of the workers and to call on temporary workers to be able to supply the baskets. La Courneuve, Ile de France, France, April 2020 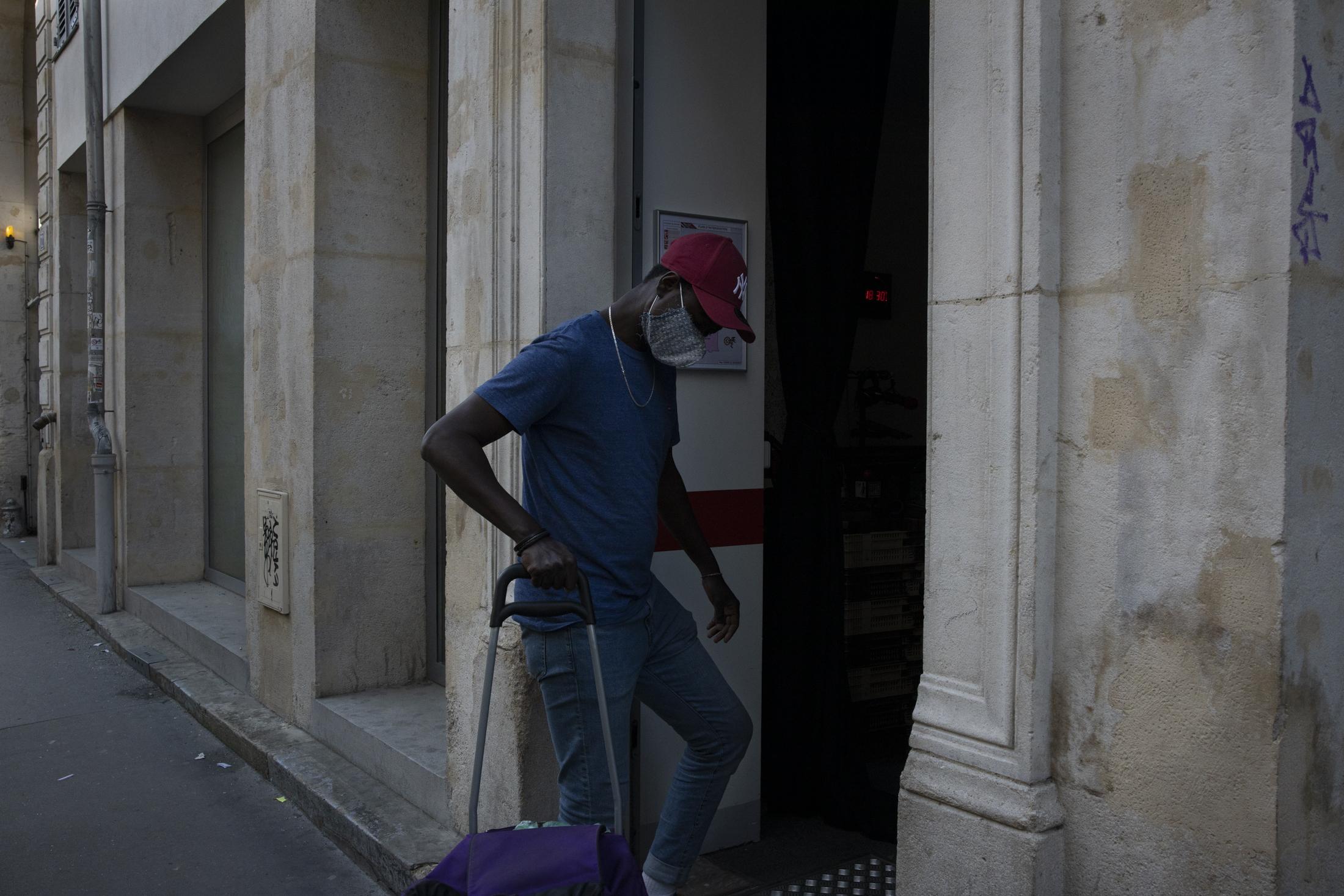 Lamine Diakité, 34, a dressmaker, he came to get his weekly vegetable basket. Lamine and his wife Petra, have been part of the AMAP chain for two years and always buy local products. One of the major concerns with the quarantine was that AMAP could no longer deliver products in the city, "but amap is here and this confirms for us that the networks of small producers are very strong, resistant and a safe alternative to healthy food. ". 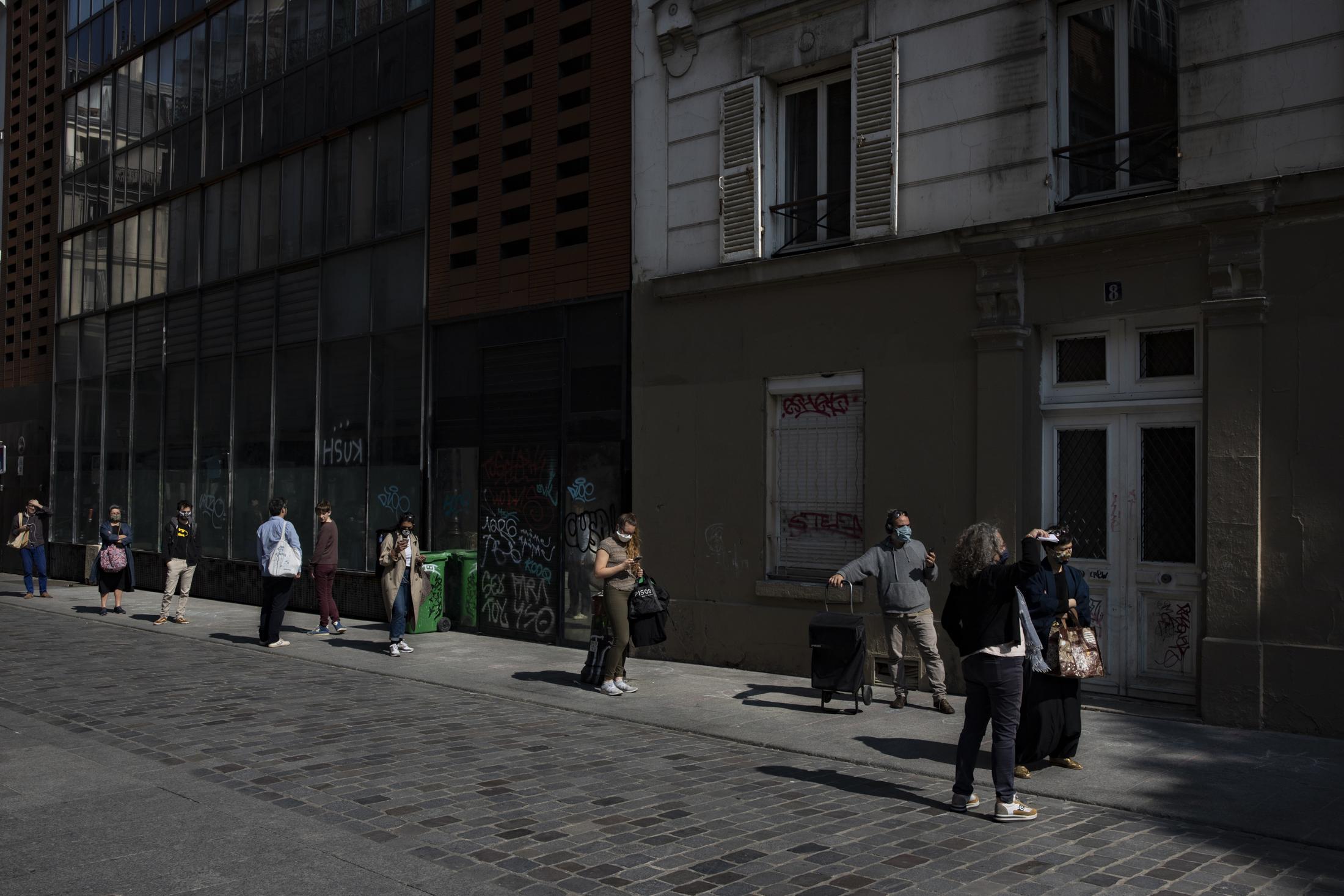 The queue for the purchase of baskets from one of La Ruche Qui Dit Oui's distributions in Paris. In this district, the sale of baskets has doubled since quarantine. According to the manager, they could triple the sale if the production network allowed. Today they are forced to stop selling online when it reaches the limit, leaving several consumers - sometimes former customers - aside. Paris, France, April 2020 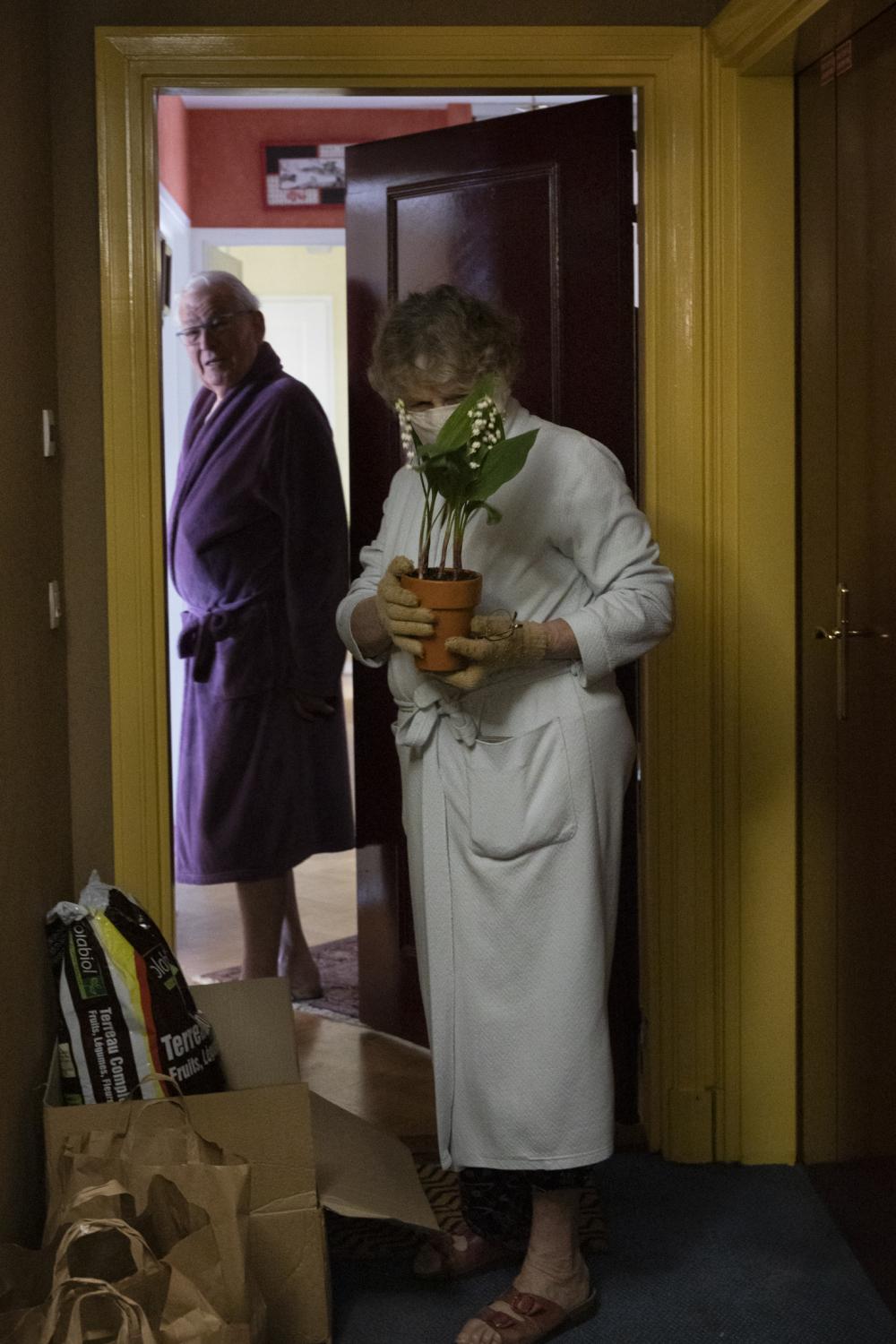 Josette Laeautey receives her first home shopping from La Ruche Qui Dit Oui. Josette decided to do her shopping through the delivery system after being oriented by her daughter who is registered in the AMAP small producers network. As an elderly woman and in a risk group, she wanted to try the baskets of local products by the convenience of not having to go to the supermarket and have good products at home. "I will not change it after the pandemic, if I do find everything I need through this system." 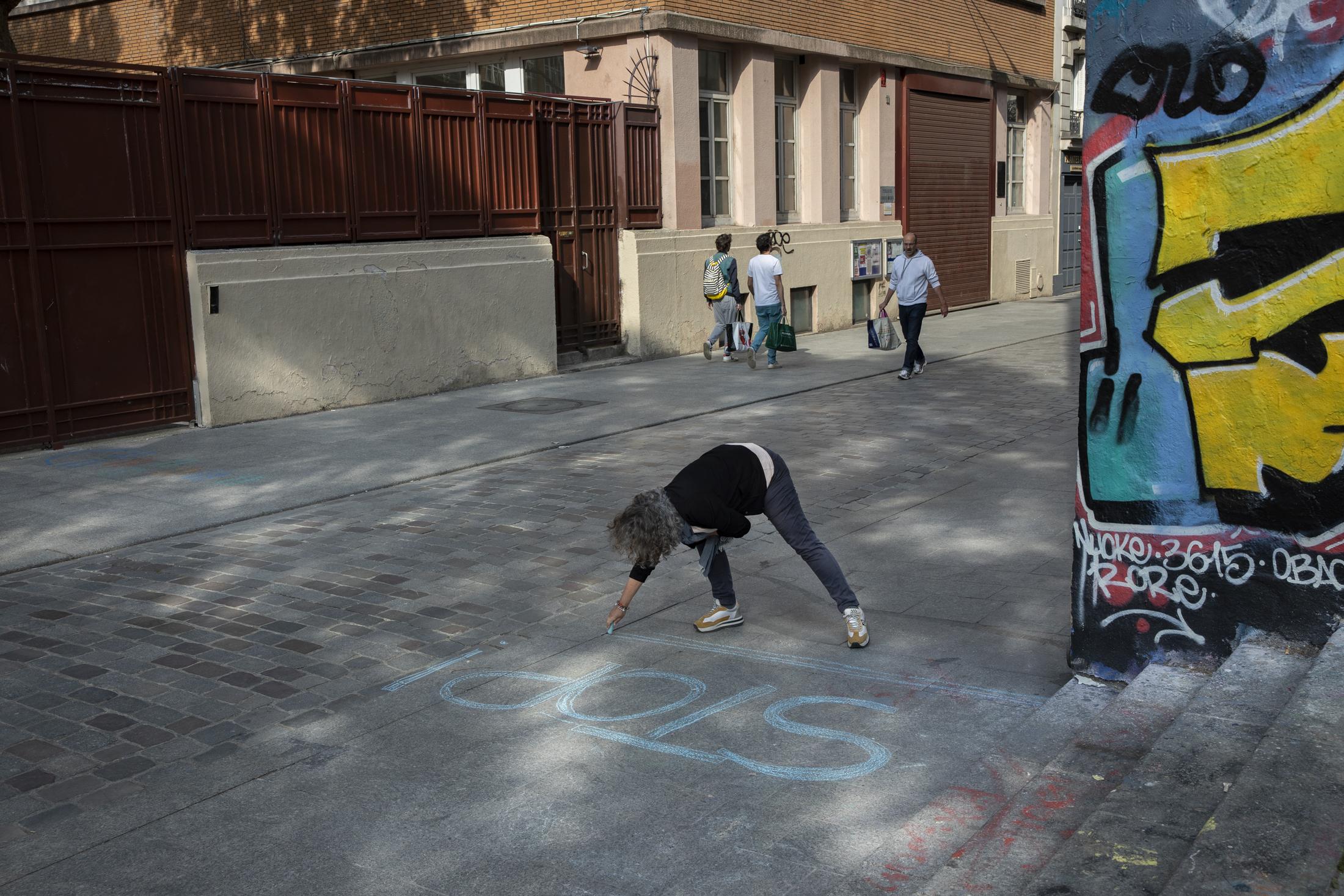 A volunteer in the distribution of baskets in Paris marks on the ground the line of separation and measure of security from to covid19. Paris, France, April 2020